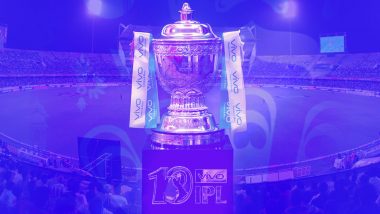 Indian Premier League 2018 will feature a total of 60 matches

VIVO Indian Premier League 11 commonly called IPL 2018 starts from April 7 with the two of the most successful teams of the tournament, Mumbai Indians (MI) and Chennai Super Kings (CSK) locking horns for what is certain to be two months action-packed drama and sporting extravaganza. The IPL 2018 schedule features a total of 60 matches from April 7 to May 27, 2018. After the IPL 2018 opening ceremony, the first fixture MI vs CSK will begin at 8 pm IST.  Understanding the craze of IPL in the cricketing world, we bring to you a handbook on IPL 2018 with complete match fixtures, teams, venue and timings details. The IPL 11 timetable includes details of home and away matches of all eight teams. VIVO Indian Premier League 11 full schedule can be downloaded in PDF format as well as JPEG for your quick reference. Come on, we all know how badly we all are glued to IPL matches once the tournament kicks off and we got to be prepared! Download IPL 2018 Full Schedule in PDF.

Defending champions Mumbai Indians will take on two-time IPL winners Chennai Super Kings in the IPL 2018 season opener on April 7 in Mumbai. Chennai which is making a comeback after two years will also reunite with their talismanic captain, Mahendra Singh Dhoni as the leader. There were a lot of speculations over the regular match timings being changed, however, they remain unaltered - afternoon matches are scheduled to begin at 4 pm IST and the evening matches to start at 8 pm. In fact, the IPL 2018 schedule has 13 doubleheaders and all of them being played out on the weekend – Saturday and Sunday. 44 fixtures out of 60 matches in the timetable is scheduled to take place in evenings. IPL 2018: Get Complete Schedule, Full List of Teams with Players & Online Tickets Detail of Vivo IPL Season 11.

Coming to the venues for Indian Premier League 2018, in addition to the eight home stadiums attributed for each of the franchises, Indore is selected as the ninth venue. Indore’s Holkar stadium is most likely to serve as the home ground for Kings XI Punjab in addition to Mohali’s Punjab Cricket Association IS Bindra Stadium continuing to be team’s principal venue. The decision to have two home bases for KXIP came after issues concerning the security arrangements emerged between the Punjab government and Punjab Cricket Association during the previous edition. Mumbai will be hosting the season opener and the final match. The Wankhede Stadium will also host the first qualifier. However, the venue for two playoffs – eliminator and second qualifier remain undecided as there is still a discussion going on over it.

Star India bagged the media rights of Indian Premier League 2018 from Sony Pictures to become the official broadcaster of cricketing world’s richest domestic tournament for the next five years. Star India will telecast the exciting competition from this season onwards in six languages on 10 Star Sports channels. The six languages are English, Hindi, Kannada, Tamil, Telugu and Bengali. There will be an additional feed on Star Sports Select giving more details around the games. As for the live streaming option, fans will have Star India’s over-the-top (OTT) service Hotstar that will stream the matches live from the ground. “IPL is the biggest property on television today. It has withstood the challenge of fragmentation and has grown both in terms of viewership and watch time. Most importantly, it is gender and age group agnostic,” Sanjay Gupta, Managing Director of Star India was quoted saying in an ET report.

(The above story first appeared on LatestLY on Apr 06, 2018 04:28 PM IST. For more news and updates on politics, world, sports, entertainment and lifestyle, log on to our website latestly.com).