IPL 2020: Jaydev Unadkat and Other Players Who Can Captain Rajasthan Royals if Steve Smith Misses Start of the Season in UAE

England and Australian players will be able to join their respective IPL franchises late. Rajasthan Royals captain Steve Smith is expected to be part of Australia’s squad and thus the franchise could miss his services for first few matches. We look at the possible three players who can lead Royals in Smith’s absence. 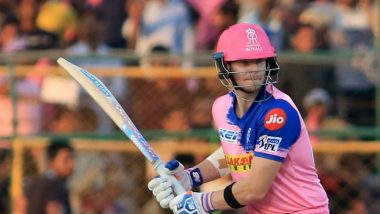 The Indian Premier League 2020 (IPL 2020) is set to take place from September 19 onwards in the United Arab Emirates (UAE). A window was left vacant after ICC decided to cancel the T20 World Cup in Australia. It means most of the overseas players will be available for IPL 2020 with no bilateral cricket taking place. However, England has confirmed hosting Australia for three T20Is and as many One-Day Internationals (ODIs) from between September 04 to 16. So, England and Australian players will be able to join their respective IPL franchises late. Rajasthan Royals captain Steve Smith is expected to be part of Australia’s squad, and thus the franchise could miss his services for first few matches. RR Squad for IPL 2020 in UAE: Check Updated Players' List of Rajasthan Royals Team Led by Steve Smith for Indian Premier League Season 13.

The England and Australian players are expected to reach on September 18 after the bilateral series and as per the IPL SOP, players will have to go into quarantine for six days, and during this period they will be tested for COVID-19 thrice. A player will then only join the franchise after testing negative three times. So, Royals will be without their skipper for first few matches, and that means they will have to look out for a stand-in captain. Meanwhile, we look at the possible three players who can lead Royals in Smith’s absence.

Jaydev Unadkat: The fast bowler could be the front-runner as far stand-in captaincy role is concerned. Unadkat is an experienced campaigner, and he recently guided Saurashtra to Ranji Trophy title win. Under Unadkat, Saurashtra defeated Bengal in the 2019-20 Ranji Trophy final. So, the pacer happens to be an ideal replacement for Smith. England vs Australia Series 2020 Schedule, Free PDF Download: Get Fixtures, Time Table with Match Timings in IST and Venue Details of ENG vs AUS T20I and ODI Series.

David Miller: Royals can also think about handing the responsibility to South African import in their ranks. Miller was bought by Royals at the IPL 2020 auctions. The middle-order batsman is an experienced cricketer and has played 79 matches. He has been regular in IPL since 2012.

Sanju Samson: The Jaipur-based franchise can hand wicketkeeper-batsman Sanju Samson the responsibility in the absence of Smith. He is young and can be groomed as a future captain, so don’t be surprised if he dons the captain’s hat in Smith’s absence.

(The above story first appeared on LatestLY on Aug 15, 2020 06:34 PM IST. For more news and updates on politics, world, sports, entertainment and lifestyle, log on to our website latestly.com).