IPL 2021: Ecstatic Fans Flood Twitter With Funny Memes and Jokes With Next Edition of Indian Premier League ‘Reportedly’ Months Away!

Fans are already excited for the new season of the IPL and have started trending #IPL2021 on social media immediately after the IPL 2020 final. Some fans have also expressed their disappointment as IPL 2020 came to an end. They are waiting for the new edition of the IPL to begin. IPL 2021 will reportedly have nine teams and will begin by March. 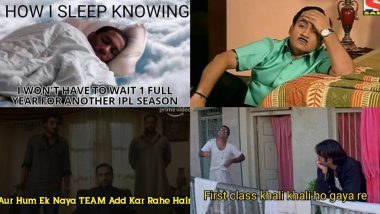 Just a day after IPL 2020 drew to an end, cricket crazy fans are eagerly waiting for IPL 2021 to start. Mumbai Indians beat Delhi Capitals by five wickets to win IPL 2020 and lift their fifth IPL trophy. And now reports have emerged that BCCI is planning and preparing to host Indian Premier League 2021 in India. Some reports have also stated that the Indian cricket board is likely to add one more franchise to the mix and make the IPL a nine-team tournament from season 14. Anxious fans have already taken to social media to show their excitement for IPL 2021 and many have even started making plans for their respective teams ahead of the new season. IPL 2021: BCCI Likely to Add Ninth Franchise for Next Edition of Indian Premier League, Teams Asked to Prepare for Mega Players Auction, Say Reports.

According to multiple reports circulating online, BCCI have already started planning for the next edition of the IPL and are looking to add a new franchise to the tournament for IPL 2021. The new team is most likely to be from Ahmedabad with the Gujarat Cricket Association recently refurbishing the Sardar Vallabhbhai Patel Stadium into a one lakh sitter. Plans of hosting a mega IPL players auctions for IPL 2021 have also emerged with reports stating the board have already asked the eight teams to prepare for a big players auction for next season. Gautam Gambhir Wants Rohit Sharma to Replace Virat Kohli as India’s ODI & T20I Captain as Mumbai Indians Lift Fifth IPL Title.

Fans are already excited for the new season of the IPL and have started trending #IPL2021 on social media immediately after the IPL 2020 final. Some fans have also expressed their disappointment on the ending of IPL 2020 and are eagerly waiting for the new edition of the IPL to begin. Take a look at some of the best reactions on Twitter as fans anxiously wait for more clarification on IPL 2021.

~ BCCI has indicated to the franchises.

CSK fans after watching MI winning their 5th title and they are still with 3 titles:#IPL2021 pic.twitter.com/oGztKuPPNV

#IPL2021 The New Team From Ahmedabad Has Been Introduced pic.twitter.com/1I8pHgJ5H2

Megha auction,9 teams probably one from UP🤞 less go #IPL2021pic.twitter.com/zO3o37NOfX

Already Anxious as to how to spend the evening today :( #IPLblues . #IPL2021 please come fast !

BCCI president Sourav Ganguly had already revealed plans of hosting IPL 2021 in India during the course of IPL 2020. Season 14 of the IPL is likely to be held between March and May in India with the players auction scheduled for either the final week of December or in January. The scheduling of IPL 2021 will also depend on the cricketing assignments of the Indian national cricket team, who are set to tour Australia for a full-fledged series that will run until the second week of January before they also host England at home in their next series.

(The above story first appeared on LatestLY on Nov 11, 2020 03:16 PM IST. For more news and updates on politics, world, sports, entertainment and lifestyle, log on to our website latestly.com).