Gautam Gambhir advised the Board of Control for Cricket in India (BCCI) to hand over the white-ball captaincy duties to Rohit Sharma after the dashing opener guided Mumbai Indians to Indian Premier League (IPL) 2020 title. With this Rohit became the first captain to lift as many as five IPL trophies 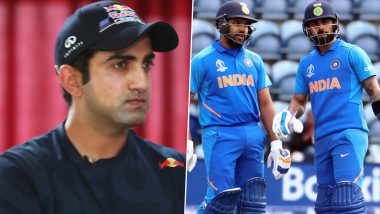 Gautam Gambhir advised the Board of Control for Cricket in India (BCCI) to hand over the white-ball captaincy duties to Rohit Sharma after the dashing opener guided Mumbai Indians to Indian Premier League (IPL) 2020 title. With this Rohit became the first captain to lift as many as five IPL trophies. Former Indian opener Gambhir was highly impressed by the Hitman's feat as he expressed desire to Sharma as India's captain in limited-overs cricket. Currently, Virat Kohli is Indian captain across all formats with Rohit being the vice-captain in ODIs and T20Is. However, Gambhir reckons that it will be India's loss if the opener doesn't get the reins of the team in the near future. Netizens Hail Rohit Sharma For Leading Mumbai Indians to Win IPL 2020 Finals Against Delhi Capitals.

"If Rohit Sharma doesn't become India's captain, it's their loss, not Rohit's," Gambhir said in a conversation with ESPNcricinfo. "Yes, a captain is only as good as his team, and I completely agree with that, but what are the parameters to judge a captain on who is good and who isn't? The parameters and benchmark should be the same. Rohit has led his team to five IPL titles," he added. Rohit Sharma Becomes First Captain to Score Two Fifty Plus Scores in Indian Premier League Finals.

Further in the conversation, the cricketer-turned-politician also said that the Hitman has done enough to earn the leadership role and it will be a shame of he doesn't get the captaincy.

"We keep saying MS Dhoni is India's most successful captain. Why? Because he has won two World Cups and three IPLs.  Rohit has won five IPL titles, he is the most successful captain in the history of the tournament. Going forward, it'll be a shame if he doesn't get India's white-ball or just T20 captaincy. Because he can't do much more than this. He can only help the team he captains to victories. So if he doesn't become India's regular white-ball captain, it will be their loss," the 39-year-old added.

Not too long ago, the former Kolkata Knight Riders (KKR) captain also held Kohli's leadership responsible for Royal Challengers Bangalore's (RCB) failure over the years. RCB are one of the only three teams to have not lifted even one title despite participating in all 13 IPL seasons. Kohli, who has led Bangalore in 8 seasons, guided his side to playoffs just three times. Gambhir was indeed not impressed with RCB's dismal show as wanted Kohli to take accountability for RCB's title drought.

On this occasion, however, Gambhir clarified that by no means Kohli is a 'poor' captain but just the fact that Rohit is more suited for the job. He highlighted that fact that both Rohit and Kohli became skipper of their respective IPL sides in 2013. Since then, the former lifted the title five times while Kohli is yet to taste glory even once. The two-time IPL winning captain also said that the team management can consider split captaincy with Kohli handling the reins in Test cricket while Rohit leading in ODIs and T20Is.

"They can also consider split-captaincy. No one is poor. Rohit has shown in white-ball cricket how big the difference is between his and Virat's captaincy. One player had led his team to five titles; the other hasn't won yet. I'm not saying this because Kohli is a poor captain. But he has received the same platform that Rohit has, so you have to judge both of them on the same parameters. Both have been captains in the IPL for the same length of time. I feel Rohit stands out as a leader," he concluded.

(The above story first appeared on LatestLY on Nov 11, 2020 12:22 PM IST. For more news and updates on politics, world, sports, entertainment and lifestyle, log on to our website latestly.com).