Maxwell had a splendid season for RCB this year, scoring above 500 runs and bailing the team out of trouble, especially in the middle-overs. He would be a good choice for the captain's role feels Vettori. 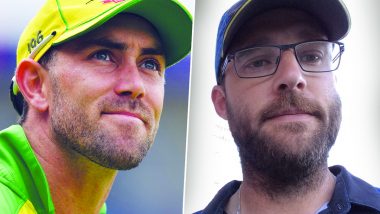 The player retentions for IPL 2022 have been made and there were quite a few expected ones along with some surprising picks by all eight franchises in the IPL retention on November 30, Tuesday. Royal Challengers Bangalore (RCB) retained three players out of a maximum four, choosing to keep former skipper Virat Kohli, Glenn Maxwell and Mohammad Siraj. It is to be noted that Kohli, at the start of the second leg of IPL 2021 earlier this year, had made it clear that he would relinquish captaincy of the side and focus on his batting instead. Now that RCB have retained these three players, the focus shifts on who is to be their next captain and Kohli's successor. IPL 2022 Retention: Full List of Players Retained and Purse Remaining Ahead of Indian Premier League Season 15 Mega Auction

Former RCB player and coach Daniel Vettori has had his say on this matter. Talking to ESPNCricinfo, he said that Maxwell could be the new captain of the franchise. The Australian all-rounder had a terrible 2020 IPL season but bounced back to form after signing for RCB this year, scoring 513 runs in 15 games. As a matter of fact, he was one of their best players in the competition. Vettori suggested that since RCB have shown faith in the Australian, it is highly likely that he becomes the next captain of the side.

"He (Maxwell) will be the likely heir to Kohli. He produced the goods last year and he was an exceptional player for them. He has the experience of captaining the Melbourne Stars. We talked about most teams wanting to find a captain when they retain players," he said, adding, "I think it has happened too often that teams have to figure out a way, know whom to find in the auction, which can cloud your thinking at times. So I do believe that Maxwell will be named captain. It could be just for one season… to see how it goes but it’s a pretty good stop-gap measure built for the future." IPL 2022 Retention List RCB: Virat Kohli, Glenn Maxwell and Mohammad Siraj Retained by Royal Challengers Bangalore

The former New Zealand all-rounder also opened up on whether Maxwell's batting would be impacted if he is named captain of the franchise. Vettori said that it might not be the case and that he and Kohli would form a very strong duo for RCB.  "I think that there is a reward for performance. I’m sure Kohli had a huge say in this. He wanted to set the way to allow someone that he didn’t really interact with to come in and lead the team. So I can see Kohli and Maxwell being in good spirits. They have been aggressive on the field and have similar demeanours. I believe that it would have played a part. We can speculate a little but it seems like the likely scenario."

With only three retained players, Royal Challengers Bangalore now would aim to do a good job at the Mega Auction and build a strong side with Kohli, Maxwell and Siraj at the core. RCB have never won the title despite reaching the final thrice.

(The above story first appeared on LatestLY on Dec 01, 2021 08:34 PM IST. For more news and updates on politics, world, sports, entertainment and lifestyle, log on to our website latestly.com).