IPL 2022: From Jos Buttler to Hardik Pandya, Here’s a List of Highest Run-Scorers for Each Team in Season 15

IPL 2022 has witnessed some top batting performances from every team. Rajasthan Royals' star Jos Buttler ended with the Orange Cap in the competition. Here's a list of all the highest scorers from each team in this edition of the competition. 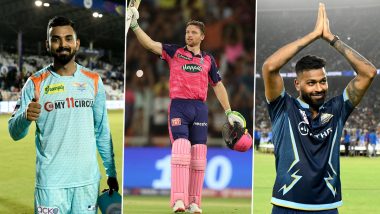 After two months of unfiltered cricket entertainment and some intensely contested clashes, Gujarat Titans won the IPL 2022 title in a rather dominating fashion over Rajasthan Royals at the Narendra Modi Stadium in Ahmedabad on Sunday, May 29. This IPL has also seen some top-notch batting efforts from all the teams in the competition, let alone the champions who have two names in the top-five run-getters list. IPL 2022 Orange Cap List Updated: Jos Buttler Ends As Highest Run-Scorer, Hardik Pandya, Shubman Gill in Top Five

Rajasthan Royals' Jos Buttler was in a whole different league as compared to others this season. The Englishman amassed a whopping 863 runs in 17 games this season and had it not been for a lean patch in the second half of the season, he could have posed a serious threat to Virat Kohli's all-time record of 973 runs in one season. Next to Buttler was Lucknow Super Giants skipper KL Rahul, who ensured his consistency with the willow in hand once again. Experienced names like David Warner, Shikhar Dhawan, Faf du Plessis and also Shreyas Iyer feature alongside some of the young stars in Abhishek Sharma, Ishan Kishan and also Ruturaj Gaikwad.

List of Highest Run-Scorers for Each Team in Season 15:

There have been other notable players who have not made it to this list but were good with the bat this season. Mumbai Indians' Tilak Varma, Rahul Tripathi, Aiden Markram from Sunrisers Hyderabad, Lucknow's Quinton de Kock and also Rajasthan Royals' captain Sanju Samson.

(The above story first appeared on LatestLY on May 30, 2022 10:26 AM IST. For more news and updates on politics, world, sports, entertainment and lifestyle, log on to our website latestly.com).