The Orange Cap, as known to all, is an accolade given to the player who scores the most runs in a single season of the IPL. Throughout the competition, the Orange Cap keeps getting exchanged between players and the one who ends at the top of the list after the final, wins the award. 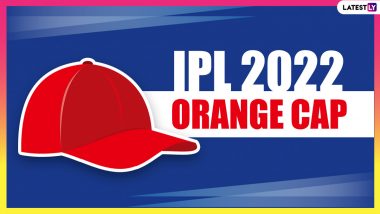 Jos Buttler consolidated his position at the top of the Orange Cap list with an 89-run knock in Qualifier 1 against Sunrisers Hyderabad. He now has 718 runs in 15 games. Gujarat Titans skipper Hardik Pandya broke into the top five with 453 runs in 14 matches. KL Rahul occupy the second spot while Quinton de Kock and Shikhar Dhawan sat at three and four respectively.  Meanwhile, you can take a look at the IPL 2022 Orange Cap updated list below. IPL 2022 Points Table Updated With NRR

Chennai Super Kings' Ruturaj Gaikwad had won the Orange Cap last season with 635 runs in 16 games. He had surpassed former teammate and current Royal Challengers Bangalore skipper Faf du Plessis by just two runs to end up as the highest run-getter. Star batter Virat Kohli holds the record for scoring the most runs in one season of the IPL, where he racked up 973 in the 2016 edition. India and Mumbai Indians legend Sachin Tendulkar was the first Indian in IPL history to win the Orange Cap when he did it in 2010.

The Orange Cap over the years, has been exchanged between international and Indian stars. David Warner has won it the most number of times (3). This season, like other years, there would be intense competition for the Orange Cap.

(The above story first appeared on LatestLY on Mar 27, 2022 01:38 PM IST. For more news and updates on politics, world, sports, entertainment and lifestyle, log on to our website latestly.com).