Delhi Capitals pacer Anrich Nortje was pleased with getting back to on-field action in IPL 2022 against Sunrisers Hyderabad on Thursday. In the run-up to the tournament, Nortje had been out of action due to a persistent hip injury, ruling him out of South Africa's series against India and New Zealand. 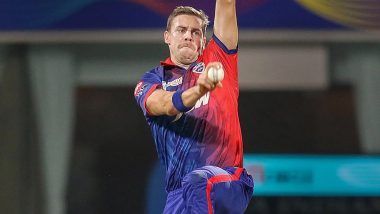 Mumbai, May 6: Delhi Capitals pacer Anrich Nortje was pleased with getting back to on-field action in IPL 2022 against Sunrisers Hyderabad on Thursday. In the run-up to the tournament, Nortje had been out of action due to a persistent hip injury, ruling him out of South Africa's series against India and New Zealand. In his first game of IPL 2022 against Lucknow Super Giants, Nortje had looked rusty and had to be taken out of the attack after bowling his second beamer, with his figures reading 0/35 in 2.2 overs. DC vs SRH, IPL 2022: We Are Playing Some Pretty Good Cricket, Insists SRH Coach Tom Moody.

Against Hyderabad at Brabourne Stadium, in defence of 208, Nortje bowled a leg-cutter, to which captain Kane Williamson could edge behind to keeper Rishabh Pant. His pumped up celebrations showed how much Williamson's wicket mattered to him. "Just a relief to be out on the field to be honest. Nice to be playing again, nice to be in rhythm. It's just nice to be playing again. You need to be sort of realistic (on injury and recovery). It's been a while playing a game and just bowling in the nets. Getting out playing a game is completely different," said Nortje after Delhi won by 21 runs.

In getting back to his fiery self, Nortje revealed that he went back to mastering the basics of the game. "Since the last game it's nice to just build it up, try and remember what I did at certain stages, how I felt, certain angles. I'm quite a basic guy so getting those basics right is quite important for me. So since the last game, I was just working a lot on rhythm and now I need to focus on a bit of skill but it was nice to be back out there and feel like my old self in a way." DC vs SRH, IPL 2022: DC Pacer Khaleel Ahmed Reaches 100 Wickets in T20 Cricket.

Nortje, 28, was appreciative of Delhi's bowling show to restrict Hyderabad 21 short of the target, with left-arm pacer Khaleel Ahmed being the pick of bowlers with 3/30. "He (Khaleel Ahmed) has been bowling really well this whole tournament. Everyone has been bowling well. Certain stages, you're going to get hit. When you have a short side, it's hard to protect the short side the whole time and sometimes it gets a bit predictable. But I think the boys bowled really well, especially at the end as well, under pressure and everyone stayed cool and calm so that was nice to see." Nortje signed off by saying that a bowler has to retain clarity in mind despite going for runs on previous balls. "You just have to be clear. Figure out your next ball and commit to it. You can't be in two minds in your run up, that's when you get it. Your best chance of succeeding is when you're clear and commit to what you're thinking about."

(The above story first appeared on LatestLY on May 06, 2022 03:12 PM IST. For more news and updates on politics, world, sports, entertainment and lifestyle, log on to our website latestly.com).