The Indian cricket board is likely to have this new addition to the competition from next season. The 'impact player' rule was earlier seen in action at the Syed Mushtaq Ali trophy earlier this year. 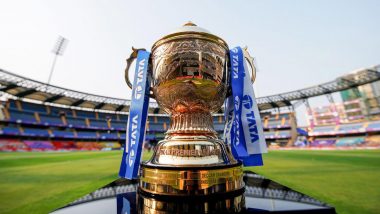 The Indian Premier League in 2023 is likely to witness a new addition in the form of the 'Impact Player' rule. Having been introduced in the Syed Mushtaq Ali trophy earlier, this concept of making a substitution during a match is set to be seen in the upcoming edition of the marquee T20 competition. There seems to have been positive feedback on this and the BCCI is keen on having this in the IPL next season. IPL 2023 Auction: 991 Players Register for Indian Premier League Mini-Auction to be Held on December 23 in Kochi

According to a report in Cricbuzz, the BCCI reportedly notified all the franchises about its intention of having this rule in the IPL in 2023. The report claims that the BCCI stated, “Note that from IPL 2023 Season a tactical/strategic concept will be introduced to add a new dimension to IPL, wherein one substitute player per team will be able to take a more active part in an IPL match. The regulations pertaining to the same will be issued shortly.” So, what is this impact player rule? This new rule permits teams to make changes to their playing XI at any point before the end of the 14th over of an innings. Four substitutes would be named along with the playing XI at the toss and this ‘impact player’ can be one of these four names.

This player can be a batter or a bowler, depending on the team’s requirements and choice. If it is a bowler, he can come on to bowl his full quota of overs. However, this ‘impact player’ rule would not be applicable in a situation where the match has been reduced to less than 10 overs. Delhi's Hrithik Shokeen had become the first 'impact player' during the Syed Mushtaq Ali trophy against Manipur, earlier this year.  Women’s IPL 2023: BCCI Reportedly Sets Rs 400 Crore As Base Price for Five Franchises

The IPL, one of the most popular T20 competitions in the world, would have its mini-auction on December 23 in Kochi where a total of 991 players are set to go under the hammer.

(The above story first appeared on LatestLY on Dec 02, 2022 12:22 PM IST. For more news and updates on politics, world, sports, entertainment and lifestyle, log on to our website latestly.com).