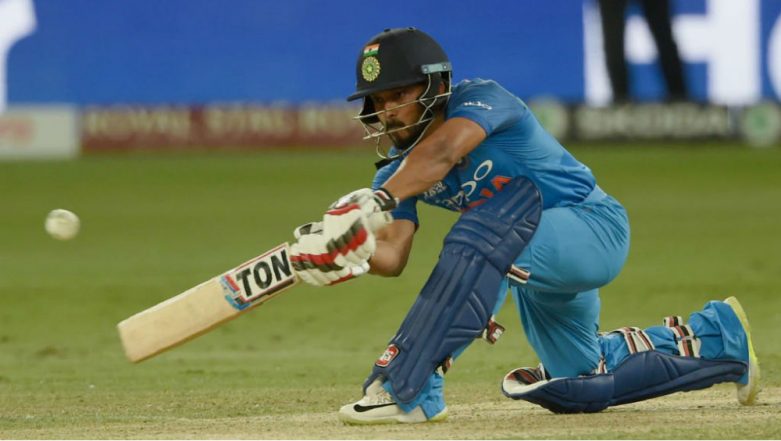 Middle-order batsman Kedar Jadhav is likely to attain full fitness ahead of the ICC Cricket World Cup 2019, which starts on May 30 in England and Wales. The right-handed batsman was injured while playing for Chennai Super Kings against Kings XI Punjab at the IS Bindra Stadium in the ongoing Indian Premier League 2019. While trying to stop an overthrow, Jadhav injured himself and left the field. Subsequently, he was ruled out of the remaining of IPL 2019 playoffs. India vs Pakistan ICC Cricket World Cup 2019 Match Tickets Sold Out Within 48 Hours.

Reportedly, Jadhav is most likely to have suffered a grade one trauma injury. And could well take two weeks to recover. The Indian team is scheduled to leave for England on May 22 and it will be interesting to see whether Jadhav boards the flight or not. Pakistan Fan 'Mauka Mauka Man' Spotted in Star Sports' New Promotional Video for ICC Cricket World Cup 2019.

"He has an impact injury and it is always better to be safe than sorry. More than dislocation it looks like a grade one trauma injury. You cannot rule out a mild subluxation either. But he should be fine in two weeks. He will not be playing in the playoffs as he needs to be fit when the Indian team leaves for the World Cup," IANS quoted a score saying. ICC Cricket World Cup 2019 Schedule in PDF: Ticket Prices, Dates, Venue Details & Timetable Available for Download Online.

If Jadhav fails to recover on time, chances are Ambati Rayudu or Rishabh Pant will replace him. Not just with his batting, Jadhav has been useful with his part-time spin and is known to break partnerships. It will definitely be a blow to the Indian side of Jadhav is ruled out of the tournament.