The side boasts of T20 specialists and can win matches on their own, on any given day. The situation that will make KKR nervous is what if they have a bad day in office, or rather, have too many bad days? 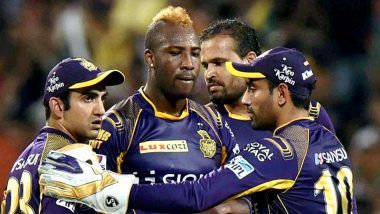 Kolkata Knight Riders (KKR) has always been one of the most news-centric and glamorous sides in the Indian Premier League (IPL) history. The franchise, co-owned by Bollywood superstar Shah Rukh Khan and yesteryear actress Juhi Chawla, has previously won the IPL Title in the year 2012 and 2014. After dismal performances in their initial three campaigns, KKR peaked when the side was revamped in 2011 and Gautam Gambhir was in-charge. The franchise with the least-known star Indian players in this IPL edition is indeed KKR. The franchise has pinned their hopes on T20 specialists in their quest for the third IPL title.

There were a lot of head-turns at this IPL Auction when the franchise didn’t use their Right-to-Match card to retain Gambhir. The Kolkata franchise has put high hopes on their limited number of recruits; their squad consists of 19 players only – the lowest for any team this season.

Andre Russell, after serving a year-long ban, will look forward to making a remarkable comeback. Known for his hard-hitting batting and economical bowling, Russell is one of their four Ace cards this season. He along with Sunil Narine are the only players retained by the team management. Another West Indian on the list, Narine added another dimension to his T20 skills, i.e. explosive T20 opener, last year. A lot of KKR’s hopes will depend upon how these two maintain their fitness throughout the tournament.

Chris Lynn, probably the best T20 batsman currently, was bought by KKR for a whopping amount. Known for his batting prowess, Lynn will look to continue his red-hot form from the Big Bash League (BBL) in the IPL.

The list of Indian batsman in the side includes Dinesh Karthik, Robin Uthappa, and Nitish Rana. KKR will feel a little disappointed with a weakened bench strength compared to its contemporaries this year. The find of the U-19 ICC CWC tournament, Shubham Gill, will seek to make the most of the opportunities he will be given.

Knight Riders’ bowling is one of the most ferocious bowling sides in the tournament. A known-home for express pacers, the KKR squad boasts names of Mitchell Starc, Mitchell Johnson, young speed-sensations Kamlesh Nagarkoti and  Shivam Mavi. It will be a treat to watch the KKR bowlers in action during this IPL. Kuldeep Yadav, given his current form and how he has managed to bamboozle batsmen in the past one year, might also turn out to be one of the highest wicket-takers in the tournament.

Kolkata Knight Riders play their home matches at the historic Eden Gardens Stadium. The franchise has been involved in an intense rivalry with Rajasthan Royals (RR) and Royal Challengers Bangalore (RCB) over the years, with Mumbai Indians being their nemesis. Who has forgotten the ill-fought altercation between Virat Kohli and Gautam Gambhir?

The Kolkata franchise has a weak bench strength this season. If any player of their first-choice 11 players gets injured in the tournament, it will be difficult for the team management to find a suitable replacement. Nonetheless, the side boasts of T20 specialists and can win matches on their own, on any given day.

The situation that will make KKR nervous is what if they have a bad day in office, or rather, have too many bad days? However, it will be thrilling to see both young and experienced fast-bowlers bowl toe-crushing Yorkers in tandem, this IPL. Stay tuned with us for all the latest updates on Indian Premier League (IPL) 2018 and Kolkata Knight Riders.

(The above story first appeared on LatestLY on Feb 05, 2018 05:21 PM IST. For more news and updates on politics, world, sports, entertainment and lifestyle, log on to our website latestly.com).