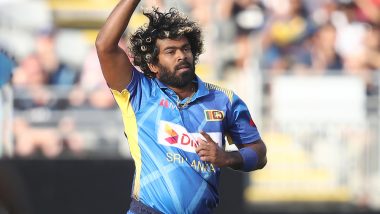 Colombo, June 18: Sri Lanka's T20 captain and veteran pacer Lasith Malinga was not named in the 24-member list of players who will be part of the team's second residential training camp starting June 22 in Kandy.

"The national men's players will commence its second ‘Residential Training Camp' on the 22nd of June, strictly adhering to the health regulations imposed by the government in view of the COVID-19 pandemic. Jasprit Bumrah Praises Lasith Malinga, Says ‘He Is the Best Yorker Bowler in the World’.

"A total of 24 players will take part in the 10 – day training camp, which will be held at the Pallekele International Cricket Stadium, whilst the focus this time will be on player conditioning and enhancing skills," Sri Lanka Cricket said in a media release on Thursday. 2011 Cricket World Cup Final Was Fixed, Alleges Sri Lankan Minister; Mahela Jayawardene, Kumar Sangakkara Rubbishes the Claim.

"The arrangements for the next camp is aimed at becoming the best prepared international team post-COVID–19 and to be ready to play at any given time," said head coach Mickey Arthur.

The coaching and support staff, who will work with the players during the upcoming training camp consists of a six-member unit, the statement further said.

The squad members will continue to follow the same health procedures, which was adhered to during the first camp conducted earlier this month.

(The above story first appeared on LatestLY on Jun 18, 2020 06:40 PM IST. For more news and updates on politics, world, sports, entertainment and lifestyle, log on to our website latestly.com).