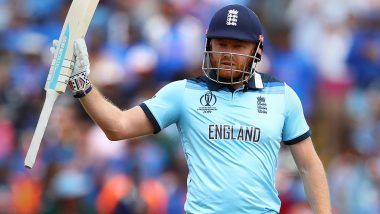 Jonny Bairstow stormed back to the top-10 ICC ODI batting rankings after finishing the England vs Australia series as the highest run-scorer. The dashing English opener scored 196 runs in three matches with the help of a hundred and a half-century. With this, Bairstow is the new 10th-ranked batsman in One Day Internationals. Indian captain Virat Kohli continues to dominate the rankings at the pinnacle position while his deputy Rohit Sharma still has the second position. Aussie skipper Aaron Finch has retained the seventh position after a lukewarm performance while his opening partner David Warner has slipped down to the eighth position after a poor show. ENG vs AUS Stat Highlights 3rd ODI 2020: Glenn Maxwell & Alex Carey’s Centuries Lead Australia to 2-1 Series Win.

Coming back to Bairstow, the batsman was on a string of low scores before the series. However, he gained his lost form back against the potent Aussie attack. Bairstow brilliantly tackled the likes of Mitchell Starc and Pat Cummins despite not getting much support from other top-order batsmen. Well, the Three Lions might have lost the series 1-2, but Bairstow’s sensational form is a great sign ahead of the team’s next assignment. Fans Praise Glenn Maxwell As Australian Helps Team to Series Win With Brilliant Century.

Bairstow emphatically started the ODI series, scoring a half-century. Chasing 295 for victory, veterans like Jason Roy, Joe Root and Jos Buttler were dismissed for low scores, but the opener didn’t his guards down and scored 84 runs. His efforts, however, went in vain as the visitors won the game by 19 runs. He was dismissed for a duck in the second ODI but made a solid comeback in the deciding clash. Bairstow paced his knock to perfection and brought up his 10th ODI century, guiding England to 302-7 while batting first. The game eventually clinched by Australia thanks to the Alex Carey-Glenn Maxwell show but Bairstow’s ton gave him the 10th position in ODIs.

Jonny Bairstow Storms Back to the Top-10

The swashbuckling batsman’s next assignment will get underway in the 13th edition of the Indian Premier League (IPL 2020) where he plays for Sunrisers Hyderabad (SRH). The team management must be ecstatic with Bairstow’s recent blitzes and will expect him to put up a similar show in UAE. However, the wicket-keeper batsman might miss some initial matches due to the quarantine protocols amid the COVID-19 crisis.

(The above story first appeared on LatestLY on Sep 17, 2020 02:53 PM IST. For more news and updates on politics, world, sports, entertainment and lifestyle, log on to our website latestly.com).