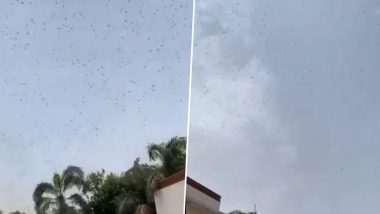 Swarms of locusts were seen flying in major parts of Gurugram on Saturday (June 27) and they even reached the residence of Virender Sehwag. The former Indian opener took to his official Instagram account and shared a video in which a heap of loctus can be seen flying over his house. On Friday, the city administration had asked the people of Gurugram to keep their doors and windows closed as a loctus attack is anticipated. As per the expectation, thousands of locusts covered the sky in major parts of Haryana and Delhi border. Locust Swarms Attack Gurugram! Netizens Post Scary Pics and Videos of Tiddi Dal Spotted in Gurgaon.

“Locusts attack, right above the house #hamla,” wrote Sehwag while sharing the video on the picture-sharing website. Locusts are a collection of certain species of grasshoppers that can destroy crops of different kinds. Owing to the crisis, Delhi Environment Minister Gopal Rai called an emergency meeting on Saturday to discuss how to tackle the situation. He also asked the officials of the agriculture department to make field visits in areas close to Gurugram in order to know the impact of the swarms. Meanwhile, let’s look at the video shared by Sehwag.

Earlier in the day, Sehwag also shared a video of a 5-year-old boy operating a JCB machine. He was amazed by the ‘talent and self-belief’ of the child as he heaped praises on him.

Meanwhile, Sehwag, just like many other Indian cricket stars, has displayed great social responsibility owing to the COVID-19 crisis. He has been proving home-cooked to poor people and is also urging others to come forward and help the one in need.

(The above story first appeared on LatestLY on Jun 27, 2020 08:29 PM IST. For more news and updates on politics, world, sports, entertainment and lifestyle, log on to our website latestly.com).