So far, only England and West Indies seem to have made progress in this regard as they have returned to training keeping in mind their proposed three-Test series in July. However, former India cricketer and Cricket Advisory Committee (CAC) member Madan Lal urged the stakeholders to remain cautious is these unprecedented times. 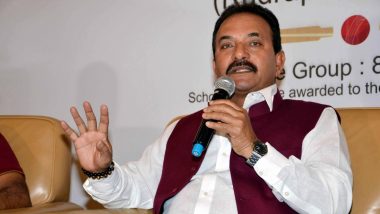 New Delhi, May 28: Cricket around the world is slowly and steadily trying to get back on its feet after being suspended since March in the wake of coronavirus pandemic. The entire calendar was shredded by the virus outbreak and officials around the world are still looking for that little something which would kickstart the beleaguered sport.

So far, only England and West Indies seem to have made progress in this regard as they have returned to training keeping in mind their proposed three-Test series in July. However, former India cricketer and Cricket Advisory Committee (CAC) member Madan Lal urged the stakeholders to remain cautious is these unprecedented times. 'IPL 2020 Would be a Great Fit', KKR Bowler Pat Cummins Welcomes Possibility of Holding Indian Premier League 13 Instead of T20 World Cup.

"In England things aren't looking good as far as coronavirus cases are concerned. There have been many deaths in the country as well. It's a very tricky situation," Lal told IANS.

In normal circumstances, young Indian players would have been currently rubbing shoulders with the best in business in the 13th edition of the Indian Premier League but the tournament also has been postponed looking at the virus threat.

Lal believes that authorities should be ready with their plans to host such big tournaments in case the situation improves in the near future. But he did cast doubts regarding everyone's safety if a player tests positive for the virus right in the middle of such high-profile tournaments.

"Even I am in favour of the IPL and T20 World Cup. But there should be sound planning in place for such big tournaments. In case coronavirus threat normalises then authorities should be ready to host it by following all necessary government guidelines," the 1983 World Cup winner said.

"I personally feel that going ahead with such tournaments will be very difficult because if any player contracts the virus inside the stadium then you will have to stop everything abruptly."

He did, however, conceded that IPL is responsible for the livelihood of so many people associated with the game in the country. So, it's not just about entertainment but also helps in putting food on the table of so many people.

"If there is no World Cup then IPL can be played in that window under controlled environment. If you can't call in 16 teams to one country then taking situation under consideration, IPL can be played," Lal said. ICC All Set to Postpone T20 World Cup 2020, Decision Likely During Board Meeting on May 28; Window for IPL 13 in October-November: Report.

"There is still a few months left before such talks can happen but I feel officials should be ready. If God willing everything is okay, then go ahead with it. Thousands earn their livelihood through cricket," he added.

The T20 World Cup is currently scheduled to be played Down Under starting October but due to the pandemic it is likely to get postponed to 2022. The BCCI is reportedly targetting a similar window to host the IPL.

"Cricket is a multi-billion dollar industry and one of the most hit industries due to the pandemic. My personal feelings is we shouldn't jump the gun so that people don't lose their lives," Lal said.

He also let his feelings known about the few academies and cricket coaching centres that opened up in the city recently after government relaxed lockdown rules. According to Lal, coronavirus coupled with heatwave across the capital, combine to make a very deadly mixture for the kids trying to make it big in the sport.

"Positive coronavirus cases are increasing day by day while heat in Delhi is hovering around 48 degrees. People have been sitting at home for the last 60 odd days so aren't used to the heat," Lal said.

"People should wait a bit more (before going back on the pitch). Even I have an academy and I was the one who used to go there every day, but I don't want to take a chance with kids because if something happens I will regret that my entire life. Cricket can wait for a few months and once things settle, then why not."

(The above story first appeared on LatestLY on May 28, 2020 01:58 PM IST. For more news and updates on politics, world, sports, entertainment and lifestyle, log on to our website latestly.com).