The Karnataka States Cricket Association organized Maharaja Trophy KSCA T20 League 2022 has been started from August 7 with six teams competing for top honours. Scroll down below to check the points table of the league. 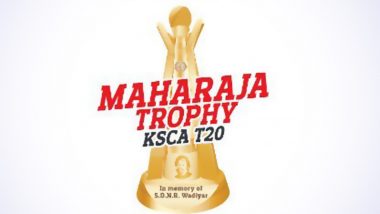 Mysore Warriors defeated Hubli Tigers by five wickets in the eliminator of the the Maharaja Trophy KSCA T20 League 2022 today. Later in the day, Bengaluru Blasters will face Gulbarga Mystics in the first Qualifier of the T20 tournament. The losing team of this match will take on Mysore Warriors in the Qualifier-2. The T20 Franchise League has been started from August 7 and will end on August 22. The Karnataka Board have named this cricket tournament after the honourable late Srikantadatta Narasimharaja Wadiyar who was the Maharaja of Mysore and president of KSCA. In the last week of July, the trophy of logo of the KSCA T20 League were unveiled at the Chinnaswamy Stadium. ICC Men's T20I Player Rankings: Shreyas Iyer Reaches 19th Spot; Kuldeep Yadav, Ravi Bishnoi Make Advances

The inaugural edition of the Karnataka States Cricket Association T20 League has welcomed six teams. Top cities of the state such as Bangalore, Mysore, Hubli, Shivamogga, Mangalore and Raichur will be fighting with each other for the silver crown. Chinnaswamy Stadium and Narasimharaja Wadiyar Ground will host the matches of Maharaja Trophy KSCA T20 League. Top players like Devdutt Padikkal, Manish Pandey, Mayank Agarwal, Karun Nair, Shreyas Gopal and many others will feature in this franchise crime tournament.

(The above story first appeared on LatestLY on Aug 10, 2022 03:42 PM IST. For more news and updates on politics, world, sports, entertainment and lifestyle, log on to our website latestly.com).