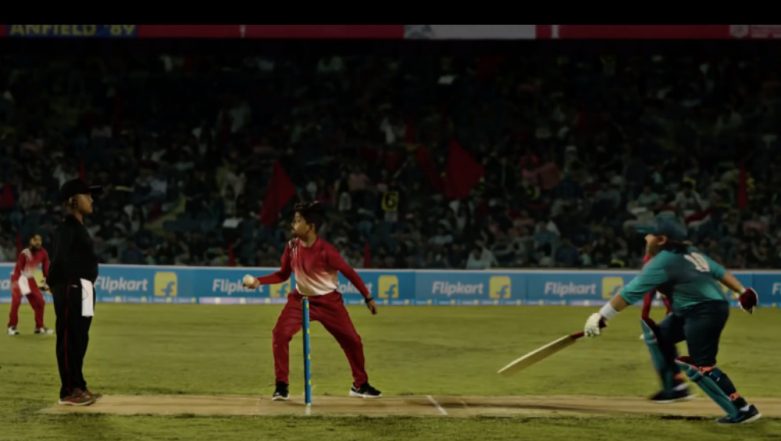 It is cricket season and e-commerce website Flipkart has released its new TVC based on the sport. During the Indian Premier League 2019 (IPL 2019), which is nearing its end, Kings XI Punjab (KXIP) captain Ravi Ashwin stoked a controversy when he mankaded, a form of controversial dismissal, Rajasthan Royals’ Jos Buttler. The dismissal was highly debated and some believed it was against the spirit of the game. What Is Mankading? All About The Mankad Way Of Dismissal That Was Used By R Ashwin to Run Out Jos Buttler In IPL 2019.

Meanwhile, ahead of the Big Shopping Days sale, Flipkart’s new advertisement is based on the mankading incident, though in the disclaimer Flipkart maintains that ‘scenes, characters and their names are fictional and representational in nature.’ Flipkart has titled its new ad as ‘Mankader or victim can both win? Yes! Only at Flipkart’s Big Shopping Days!’. R Ashwin Run Out Jos Buttler Mankad-Style in IPL 2019, This is Second Time English Man Got Out In This Fashion; Watch Video

Mankading has been the controversial form of dismissal and for long has seen fans and experts divided on it. After the mankading episode, Ashwin maintained that it was not planned and it happened because it is within the rules "Look it was very instinctive. It wasn't planned or anything like that. It's there within the rules of the game. I don't know from where the understanding of the Spirit of the Game comes," Ashwin said.