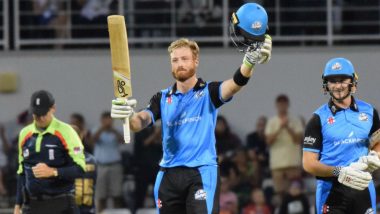 Guptill, while opening the innings, scored 102 off just 38 balls. His innings comprised of 12 fours and seven sixes. The Kiwi opener spent 40 minutes in the middle and ended with a strike-rate of 268.42. He was dismissed in the 11th over of Worcestershire innings. This was Guptill’s fourth domestic T20 hundred. At the international level, the 30-year-old has two centuries against his name. You can watch video highlights of Martin Guptill's century here.

Guptill along with Joe Clarke added 162 for the opening wicket as Worcestershire were chasing a target of 188 runs. Guptill was the Lon wicket Worcestershire lost as they completed the chase in just 13.1 overs. Clarke carried his bat through and scored 61 off 33 balls. Australia’s Travis Head remained unbeaten on 20 off just nine balls as Worcestershire crossed the line.

(The above story first appeared on LatestLY on Jul 28, 2018 11:16 AM IST. For more news and updates on politics, world, sports, entertainment and lifestyle, log on to our website latestly.com).