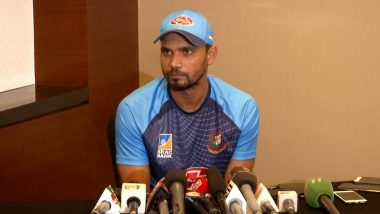 Sylhet, March 5: Mashrafe Mortaza has announced that he will step down as Bangladesh ODI captain after the third and final match of the ongoing series against Zimbabwe to be played on Friday. Mortaza, however, has said that he will continue as a player, reports ESPNIndia. His announcement comes after the Bangladesh Cricket Board (BCB) president Nazmul Hassan, prior to the ODI series, had said that they would look for a new captain after this series. Bangladesh vs Zimbabwe 2nd ODI: Tamim Iqbal Shines As Hosts Clinch Series After Thrilling Four-Run Win.

Mortaza, who made his senior team debut in 2001, was first named ODI captain in 2010. He led the team to the semi-final of the 2017 Champions Trophy and the quarter-final of the 2015 World Cup, after taking over as the white-ball captain in November 2014. Tamim Iqbal Becomes First Bangladeshi Batsman to Score 7000 ODI Runs, Achieves Feat in BAN vs ZIM 2nd ODI 2020.

In total, he led Bangladesh in 87 ODIs, winning 49 and losing 36. He also captained in 28 T20Is in which his team emerged victorious on 10 occasions. The all-rounder also led the team in one Test, against West Indies in 2009, which Bangladesh won.

(The above story first appeared on LatestLY on Mar 05, 2020 05:05 PM IST. For more news and updates on politics, world, sports, entertainment and lifestyle, log on to our website latestly.com).