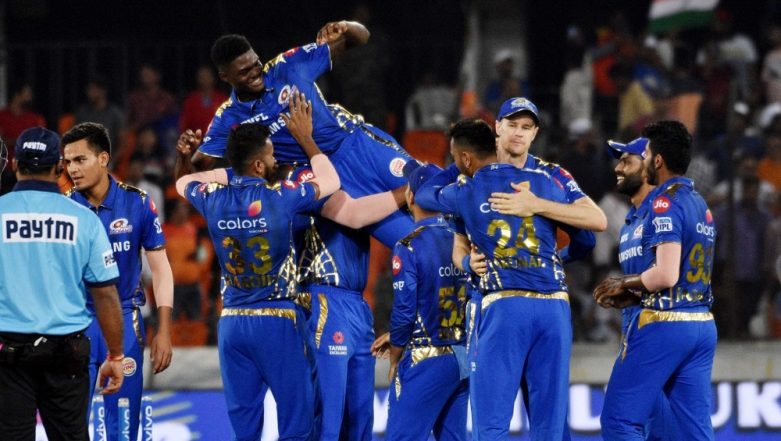 The Mumbai Indians is surely on cloud nine as they clinched the Indian Premier League title for the fourth time at the Rajiv Gandhi International Stadium in Hyderabad. It was Lasith Malinga’s heroics that helped the team win the game. The Mumbai Indians did not get a dream start in the match as the lost early wickets apart from the toss which went their way and Rohit Sharma and men opted to bat first. Quinton de Kock looked really good after hitting tall sixes and fours. But was soon sent packing by Shardul Thakur on 29 runs. MI Captain Rohit Sharma was the next to go on the score of 15. Mumbai Indians vs Chennai Super Kings Live Cricket Score.

As opposed to the Mumbai Indians, CSK got a flying start as Faf du Plessis and Shane Watson gave a good start to the team. But after a while, Faf du Plessis was sent packing by Krunal Pandya. Suresh Raina was the next to go on the score of 8 runs. Ambati Rayudu was the next to follow on the score of 1. MS Dhoni’s run out on 2 proved to be the turning point for the team. Dwayne Bravo and Ravindra Jadeja did try to stabilise Chennai from the setbacks. At one point in time, it looked like Chennai would walk away with the game as the game went down the live wire. In the last over, Lasith Malinga needed nine runs from six balls and he snapped a couple of wickets in the last over. Mumbai Indians had the last laugh as they won the game by one run.

Now, let’s check out the stat highlights of the match.

# All MI vs CSK final matches were won by the team batting first.

# Imran Tahir not only became the Purple Cap winner but also became the highest wicket-taker in the middle overs. Tahir snapped 23 wickets.

# MS Dhoni got the most number of dismissals as a wicket-keeper in the IPL with 132 wickets.

After the match, Rohit Sharma said, "Throughout the tournament, we played some good cricket which was the reason we qualified at the top. We planned to split the tournament into two parts, every thing we did as a team, we got the rewards for them. We have a squad of 25 players, everyone came in at some stage and did the job; the support-staff as well."