MI vs CSK IPL 2019 Final: We Were Just Passing Trophy to Each Other, Says MS Dhoni 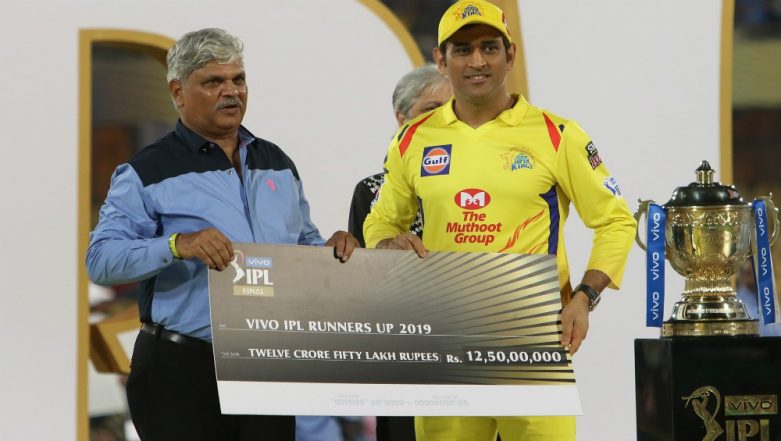 We Were Just Passing Trophy to Each Other, Says MS Dhoni. (Photo Credits: IANS)

Hyderabad, May 13: After losing the seesawing Indian Premier League (IPL) 2019 final in dramatic circumstances against the Mumbai Indians, Chennai Super Kings (CSK) skipper MS Dhoni said it was a game where both the teams made a lot of mistakes, and kept "passing the trophy to each other".

Chasing 150, CSK fell agonisingly short of clinching their fourth IPL title after they lost by just one run against Mumbai Indians in the finals, here at the Rajiv Gandhi International Stadium on Sunday. MI vs CSK IPL 2019 Final: MS Dhoni's Controversial Run-Out Was Turning Point in Dramatic Final.

"As a team we had a good season," Dhoni said at the post-match presentation.

"But I think we need to go back and reflect as to how we reached the finals, and I don't think it was one of those years where we played very good cricket and we got into the finals. I think there was plenty that could have been done from our side, especially in the middle-order batting, it never really clicked for us from the start, but somehow we were able to manage."

He said if it was funny how both the teams kept on passing the trophy from one team to the other in the summit clash.

"And looking at it as an IPL final, I think both the teams, it was quite funny: we were just passing the trophy to each other. We committed a lot of mistakes, and Mumbai Indians also did the same. At the end of the day the winning team was the one that committed one mistake less than the other team," said Dhoni.

The wicketkeeper-batsman further said there was no hurry to go the drawing boards but expected the batsmen to step up in the next edition.

"I think it was a very good final, it went close, last ball, so couldn't have gone better, but overall I think we need to go back to the drawing board and see the areas where we need to improve for next season."

When asked if he would be back next year, Dhoni kept it enigmatic. Sanjay Manjrekar, the commentator on presentation duty, concluded his interview by telling Dhoni, "well done, and we'll see you again next season".