In search of their second victory in the IPL 2019, Virat Kohli and men took on the field at the Wankhede Stadium against the Mumbai Indians. 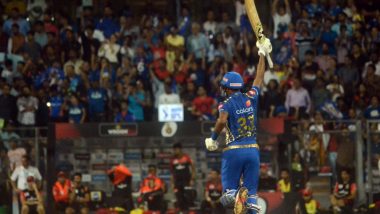 In search of their second victory in the IPL 2019, Virat Kohli and men took on the field at the Wankhede Stadium against the Mumbai Indians. After winning the toss, the home team opted to field and Virat Kohli  & men were asked to bat first. The RCB lost Virat Kohli quite early in the game. The Indian captain made way to the pavilion on the score of eight runs from nine balls. Parthiv Patel continued to build a partnership with AB de Villiers but the Indian batsman also could not survive for a long time and went to the pavilion on the score of 28. AB de Villiers and Moeen Ali stitched 95 runs for the side. That’s when Lasith Malinga stuck for the team snapping four wickets. Full Scorecard

The Sri Lankan pacer snapped the wickets of Moeen Ali, Marcus Stoinis, Akshdeep Nath and Pawan Negi. The RCB scored 171 runs. In reply, Quinton de Kock and Rohit Sharma gave a good start to the team as they scored 40 and 28 runs respectively. Titbits from other batsmen help Mumbai to get to the total where they needed 31 runs from 18 balls. Hardik Pandya stood tall and kept on hitting those big fours. In the end when Mumbai Indians needed 22 runs from 12 balls two fours and two sixes and led the team to the finishing line. Mumbai Indians won the game with one over to spare. IPL 2019 Points Table

Now let’s check out a few stats of the game.

# AB de Villiers brought up his fourth fifty of IPL 2019.

“Last couple of weeks have been a tough time for me, I had to go to Sri Lanka and play the domestic tournament. But I realised that when I get a chance, I have to give 100%,” said Lasith Malinga. With this Mumbai Indians move on the number three of the IPL 2019 points table.

(The above story first appeared on LatestLY on Apr 16, 2019 12:42 AM IST. For more news and updates on politics, world, sports, entertainment and lifestyle, log on to our website latestly.com).