Sunrisers boasts of one of the best bowling attacks in the IPL and they did well to defend the total. 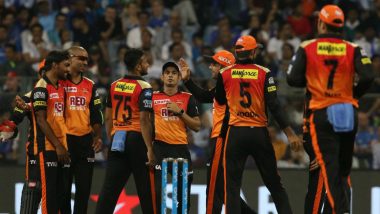 Sunrisers Hyderabad pulled off a stunning win as they defended 118 against Mumbai Indians. Chasing 119, Mumbai were bundled out for just 87 runs. This was Sunrisers’ first win over Mumbai at the Wankhede and it was also the lowest ever total defended at the venue. Meanwhile, the win now takes SRH to third place on the IPL 2018 points table. The Kane Williamson-led side have now won four out of six matches. MI vs SRH Full Scorecard

At the innings break, it looked like Mumbai Indians will register their second win of the tournament given the target they were chasing. But Sunrisers boasts of one of the best bowling attacks in the IPL and they did well to defend the total. Remember, SRH were without their strike bowlers Billy Stanlake and Bhuvneshwar Kumar. MI vs SRH- As it Happened

Sunrisers needed wickets early on and they were not disappointed. Sandeep Sharma and Mohammad Nabi started positively for SRH by removing Even Lewis and Ishan Kishan. Shakib Al Hasan then further dented the hosts when he removed MI skipper Rohit Sharma. At Rohit’s fall of wicket, MI were 21 for three. You can watch video highlights of MI vs SRH here.

Suryakumar Yadav and Krunal Pandya then brought some stability in MI’s innings with a 40-run stand. However, Rashid Khan struck at a crucial time to dismiss Pandya. In his next over, he removed Kieron Pollard to bring SRH back in the contest.

The pressure started to creep up as Mumbai kept losing wickets. Siddharth Kaul and Basil Thampi shared last five wickets to fell between them as Mumbai were bowled out for 87.

Kaul returned with figures of 3/23 while Thampi picked 2/4. Khan walked away with the Man of the Match award as he picked 2/11 in his quota of four overs.

Earlier out to bat, Sunrisers too lost wickets at the regular intervals and managed only 118, which however proved to be more than sufficient. Williamson and Yusuf Pathan were both top-scorers for SRH with 29.

(The above story first appeared on LatestLY on Apr 25, 2018 12:20 AM IST. For more news and updates on politics, world, sports, entertainment and lifestyle, log on to our website latestly.com).