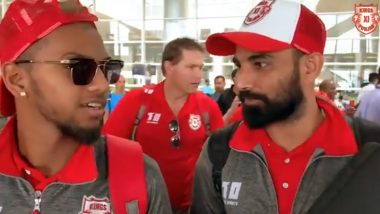 Social media is flooded with throwback pictures and videos as people are advised to stay at home amid the COVID-19 crisis. Recently, the official Twitter account of Kings XI Punjab (KXIP) also shared an old video which left the fans in splits. The clip features Indian pacer Mohammed Shami and West Indies wicket-keeper batsman Nicholas Pooran, who played for KXIP for the 2019 edition of the Indian Premier League. In the video, Shami can be seen giving Hindi lessons to the southpaw. The video was nothing less than hilarious as fans were left in splits as they came across the post. IPL 2020 Update: UAE to All Set to Host Indian Premier League 13.

In the video, Shami can be heard saying "Aap kaha jaa rahe ho (Where are you going)" while Pooran is trying to repeat after him. The left-handed batsman didn’t nail the sentence at first. However, he eventually managed to get it right after a couple of trials. While sharing the video on the micro-blogging website, KXIP wrote: "Hindi lessons ft. Nicky Praa!" Have a look. Mohammed Shami Enjoys ‘Quality Practice Session’ at Farmhouse Amid COVID-19 Crisis.

KXIP bought Pooran in IPL 2019 auction for a whopping price of 4.2 crore. The left-handed batsman scored 168 runs in seven matches he played. On the other hand, Shami was also bought by KXIP in the same year. The right-arm pacer didn’t disappoint as he took 19 wickets in just 14 games. Unfortunately, KXIP couldn’t qualify for the playoffs as they finished the tournament at sixth place.

Pooran and Shami were set to join forces for KXIP in the 2020 edition of IPL. However, just like many other sporting events, the T20 extravaganza also got postponed indefinitely due to the COVID-19 crisis.

(The above story first appeared on LatestLY on Jul 16, 2020 04:23 PM IST. For more news and updates on politics, world, sports, entertainment and lifestyle, log on to our website latestly.com).