Mahendra Singh Dhoni is the icon of world cricket who has billions of supporters all over the world. The man, who turns 41 on July 07, is the most successful skipper in the history of Indian cricket. 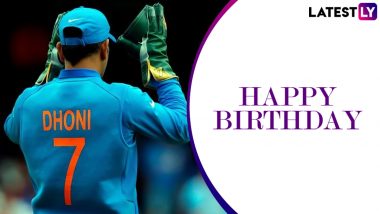 Mahendra Singh Dhoni! This name contains the emotions of billions of cricket fans across the world. To some fans, this name is a story, a story of victory. There's no cricket fan in this world who doesn't know this name and the legacy behind this name, and more importantly doesn't feel the emotions surrounding it. Dhoni, a legend of the royal sport, doesn't belong to India only. He belongs to Cricket. The former Indian skipper is arguably the most celebrated cricket team captain in the world. MS Dhoni Wallpapers and HD Images for Free Download: Happy 41st Birthday MSD Greetings, WhatsApp Status, HD Photos in CSK Jersey and Positive Messages to Share Online.

It was 2004 when a small town boy made his international debut. From Ranchi to Bangladesh, the young batter with long hair came a long way, but just to face failure in the early stage. And after that, there was no stopping for him. In his cricketing career, Dhoni, fondly called as mahi by cricket fans, has won every possible trophy. He led the Indian cricket team to 2007 T20 World Cup victory in South Africa, which was followed by another global trophy four years later.

The legend, generally named 'Thala' in Chennai by the Chennai Super Kings supporters, made his mark in the Indian Premier League (IPL) also, winning the T20 tournament for four times till date. On the occasion of his 41st birthday, here at LatestLY, we have a look at 10 records Dhoni has made to his name till now. Happy Birthday MS Dhoni: Fans Wish CSK Captain As He Turns 41 (Check MSD B’day Wishes).
10. Mahendra Singh Dhoni holds the record of most catches (256) by an Indian wicketkeeper in Test cricket.
9. Dhoni affected six dismissals (five catches & one stumping) in an ODI match. As an Indian, he holds the record of highest dismissals in single ODI game.
8. Dhoni scored 183 run against Sri Lanka in 2005. It is the highest individual score by any wicketkeeper in ODIs.
7. The former Indian skipper is the only captain to lead his team to victory in ICC Champions Trophy, ICC ODI World Cup, and ICC T20 World Cup.
6. He holds the record of leading  in the most number of matches in the Indian Premier League.
5. Dhoni has scored 3454 runs as a captain in Test cricket. This is the highest among wicketkeeper-captains.
4. Dhoni holds the record of most number of stumpings (34) in T20I history.
3. MS Dhoni is the only Indian Captain to win more than 100 ODI games.
2. Dhoni is the only wicketkeeper to go beyond 100 stumpings in the history of ODI (123).
1. He has acted as a captain in the most number of matches so far in the history of cricket.
In 2011, from Kashmir to Kanyakumari, from Gujrat to Arunachal Pradesh, the Indian fans stood on their feet and cried in joy and happiness as soon as their beloved 'Mahi' hit Nuwan Kulasekara for a six to win the 2011 ODI World Cup after 28 years. The whole country was chanting Dhoni...Dhoni...Dhoni.... And the calm and composed man connected with the emotion of a country with 1.4 billion people and finished the things off in style. The man, the myth and the legend. This is how we can sum up the legacy of Mahendra Singh Dhoni in cricket history.

(The above story first appeared on LatestLY on Jul 07, 2022 09:12 AM IST. For more news and updates on politics, world, sports, entertainment and lifestyle, log on to our website latestly.com).