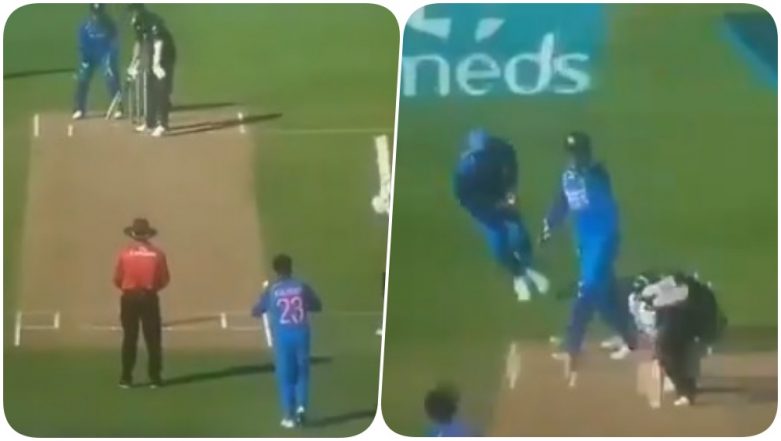 MS Dhoni is one truly one of the most experienced batsmen of the Indian team currently. Needless to say, that he passes on his experience to the youngsters to budding cricketers. Once again the former Indian captain has chipped in with his inputs during India vs New Zealand, 1st ODI at Napier. MS Dhoni smartly plotted the dismissal of Trent Boult and was sent packing by Yadav on the score of 1. The wicketkeeper-batsman behind the stumps was heard saying, “Ye aankh band kar ke rokega. Andar nahi aana chahiye. Idhar se daal. Isko doosra wala dal sakta hai.”  MS Dhoni, Mohammed Shami & Others Practice Hard at Training Session Ahead of IND vs NZ, 1st ODI 2019 in Napier: View Pictures.

Kuldeep, who gave away 11 runs, scalping final four wickets bowled exactly the way Mahi suggested and the New Zealand batsman fell for the trap. Trent Boult handed over his wicket to Rohit Sharma standing in the first slip. The incident happened in the 37th over and as a result New Zealand got bundled out on 157 runs by the Men in Blue. Check out the video below: Shikhar Dhawan Becomes Second Fastest Indian to Score 5000 ODI Runs, Virat Kohli Still at Number One.

Prior to this, New Zealand had posted a total of 300+ runs on the board against Sri Lanka in their previous series. It was Kane Williamson who made the highest score from the Kiwi’s team. He faced 81 deliveries hitting seven fours and no maximums. Meanwhile, from India’s side, Shikhar Dhawan reached the run mark of 5000 in 118 innings. He went on to beat former Indian captain Sourav Ganguly while achieving this record.