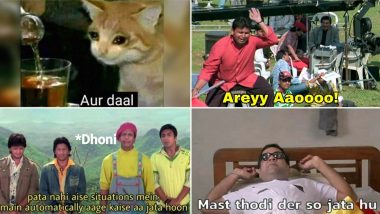 Riding on a brilliant knock by Prithvi Shaw and some high-class bowling, Delhi Capitals defeated Chennai Super Kings by an emphatic margin of – runs to register their second consecutive victory of Dream11 Indian Premier League (IPL 2020). With this triumph, Shreyas Iyer and Co also advanced to the pinnacle of team standings. Chasing 176 for victory, CSK never looked in the hunt as the scoring rate was always on the lower side. Though they didn’t lose wicket regularly, the likes of Kagiso Rabada, Anrich Nortje, Amit Mishra and Axar Patel didn’t allow the CSK batsmen to open their arms. CSK vs DC Stat Highlights IPL 2020: Prithvi Shaw Shines As Delhi Capitals Beat Chennai Super Kings by 44 Runs.

Murali Vijay's poor form continued and his place in the playing XI has been questioned by many. Also, fans bashed Dhoni late in the batting order again. As a result, they were restricted to 131/7 and lost the game by a massive margin. Netizens weren't impressed by CSK's 'intent', and they brutally trolled them on social media. CSK vs DC Highlights IPL 2020 Match 8.

Earlier in the game, MS Dhoni won the toss and elected to bowl first at the Dubai International Stadium. The decision didn’t prove to be too good as Shikhar Dhawan, and Prithvi Shaw got DC off to a solid start. The duo added 94 runs for the first wicket and set the stage for the batsmen to come. Shreyas Iyer and Rishabh Pant played some big shots in the end overs, but CSK bowlers pulled things back in the end overs with their tight bowling. Still, they were able to put up 175/3 in their allotted 20 overs which eventually proved to be enough. Meanwhile, let’s look at how netizens trolled MS Dhoni and Co. MS Dhoni Takes Stunning Catch to Dismiss Shreyas Iyer.

Another One For The Monk!!

Dhobians: He Hit 3 Sixes to maintain NR da. Then Why He Didnt do that Today😂

Dhoni when CSK is struggling and needs quick runs. pic.twitter.com/qWWdRGAJVW

Rare moment when #Dhoni's strike rate is more than 100 in early balls.#CSKvDC pic.twitter.com/VQC1wZ5IuG

With this, CSK have lost two of their first three matches, not a start they are known for. The three-time champions have looked quite fragile in the absence of Suresh Raina and Harbhajan Singh and injuries to Ambati Rayudu and Dwayne Bravo have worsened the things even more. Notably, the Men in Yellow have reached the playoff stage in all the previous seasons they participated, and they need to rebuild their strategy to maintain their record.

On the other hand, Shreyas Iyer and Co have made an emphatic start to the tournament. They have performed well in all the three departments and will be determined to get their maiden IPL title.

(The above story first appeared on LatestLY on Sep 25, 2020 11:33 PM IST. For more news and updates on politics, world, sports, entertainment and lifestyle, log on to our website latestly.com).