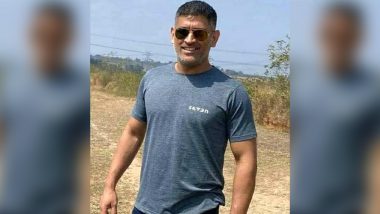 MS Dhoni will break his year-long cricket exile and return to the field when the Indian Premier League 13 gets going in UAE later this year. Dhoni who last played a competitive game in July 2019, will be leading Chennai Super Kings in IPL 2020 as the ‘men in yellow’ chase their fourth IPL trophy in 11 seasons in the franchise league. The CSK captain has been off the limelight since March and has not made a single public appearance in this time but has certainly experimented with his looks in the last couple of months. IPL 2020: MS Dhoni & Boys to Get COVID-19 Test Done Before Assembling in Chennai, Says CSK.

From turning up in an unshaved grey-beard with a simple short hair-cut in one of daughter Ziva’s cute Instagram video to being pictured in a salt-and-pepper look while ploughing a farming field in his hometown Ranchi, Dhoni has surprised his fans every time he has been clicked and captured in a frame. Recently, he also appeared to have played a little with his beard and shaped them well. He was captured while the CSK captain was busy with organic farming. MS Dhoni Does All the Tricks: Ahead of IPL 2020 Chennai Super Kings Share Fun-Filled Video Compilation of Captain Cool.

Most recently, another of Dhoni’s picture have gone viral and as always his new look will leave his fans impressed. A photo of the 39-year-old former Indian skipper was shared on the CSK fans official Instagram page and it appears to be Dhoni’s most rent look as he prepares to depart for UAE for IPL 2020.

The Helicopter is in Ranchi, looking forward to soon see it land in Dubai ! . . . #msdhoni #dhoni #csk #whistlepodu 💛 @chennaiipl

In the picture, Dhoni has trimmed his hair short and has also shaved his grey beard. He was clicked posing wearing sunglasses, a casual denim T-shirt and jeans. The CSK looked as cool and fit as he has always been. Perhaps, this is the new look Dhoni will be sporting when he leads CSK out during IPL 2020 in UAE.

Dhoni has always stayed away from the limelight and even during the lockdown due to COVID-19 pandemic, the veteran wicketkeeper-batsman made no appearances. His wife Sakshi kept his fans updated with regular posts and pictures on her social media pages. But fans will soon see the maestro in action when the IPL 2020 kicks off in UAE on September 19.

(The above story first appeared on LatestLY on Aug 03, 2020 06:33 PM IST. For more news and updates on politics, world, sports, entertainment and lifestyle, log on to our website latestly.com).