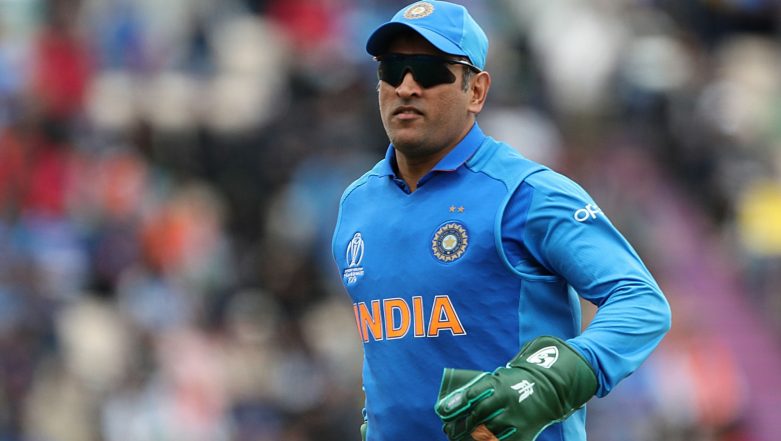 The International Cricket Council (ICC), game’s governing body has prohibited Indian wicket-keeper and former captain MS Dhoni from using Army insignia during the ongoing Cricket World Cup 2019. During India’s match against South Africa, Dhoni’s wicket-keeping gloves had an army crest on it and then ICC requested BCCI to get it removed. MS Dhoni in England for Cricket, Not Mahabharata, Says Pakistan Minister Over Army Insignia on Indian Wicket-Keeper's Gloves.

However, the Indian cricket board further requested ICC to reconsider their objection regarding Dhoni's gloves and sought permission so that the wicket-keeper can continue sporting the insignia. Meanwhile, ICC has responded and has issued a statement in this regard.

“The ICC has responded to the BCCI to confirm the logo displayed by MS Dhoni in the previous match is not permitted to be worn on his wicket-keeping gloves at the ICC Men’s Cricket World Cup 2019,” read ICC’s statement. Pakistan Players Wanted Retaliatory Celebration Against India, PCB Says No.

“The regulations for ICC events do not permit any individual message or logo to be displayed on any items of clothing or equipment. In addition to this, the logo also breaches the regulations in relation to what is permitted on wicketkeeper gloves,” it further added.