Karachi Kings would aim at finishing off this forgettable campaign on a high with a victory over Quetta Gladiators. Let us take a look at the live streaming and telecast details of this game. 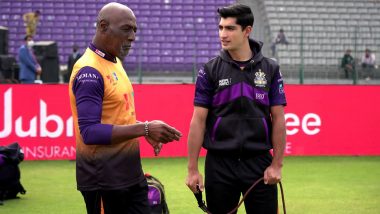 Quetta Gladiators would face Karachi Kings in a Pakistan Super League 2022 match on Sunday, February 20. The match would begin at 3:00 pm IST and is to be played at the Gaddafi Stadium in Lahore. Fresh off their maiden win in the competition which came after a long wait of seven games, Karachi Kings, who are already out of contention for a spot in the playoffs, would now aim to have a good finish to the season. In their last match of this edition of the PSL, Babar Azam's men are expected to play free-flowing cricket and ensure that they conclude well, what has been a forgettable season. Rashid Khan Receives Guard of Honour As He Bids Goodbye to PSL Franchise Lahore Qalandars for Bangladesh vs Afghanistan Series (Watch Video)

Sarfaraz Ahmed's Quetta Gladiators too, have not qualified for the playoffs so far. They have faint hopes of making it through to the last four though. James Faulker's departure due to a payment problem is likely to have left a negative impact on the squad but the franchise would want to put that episode behind and focus on this game. Let us take a look at the live streaming and telecast details of the match.

The Quetta Gladiators vs Karachi Kings match will be played at the Gaddafi Stadium in Lahore. The game is scheduled to be held on February 20, 2022 (Sunday) and will begin at 03:00 pm IST (Indian Standard Time).

Fans in India can watch the live telecast of the Quetta Gladiators vs Karachi Kings clash on Sony Sports channels. Sony Pictures Sports Network are the official broadcasters of Pakistan Super League 2022 in India. So fans need to tune into Sony Sports channels to watch the match live on their television sets.

(The above story first appeared on LatestLY on Feb 20, 2022 02:25 PM IST. For more news and updates on politics, world, sports, entertainment and lifestyle, log on to our website latestly.com).