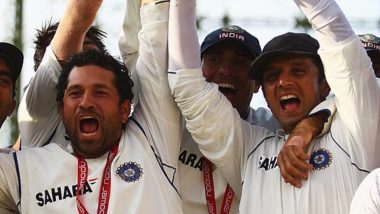 Rahul Dravid emerged as fans’ number one choice as India’s greatest Test batsman in the last 50 years in a poll conducted by Wisden India on Facebook. Dravid pipped legendary batsman Sachin Tendulkar in the final face-off of the poll. Over 11,000 fans took part in the online poll on Facebook and Dravid emerged winner with 52 per cent of the total votes. Apparently, 48 per cent voted in favour of Tendulkar. As per Wisden, Dravid was initially trailing but then ended up as fans’ choice. Yuvraj Singh Hilariously Trolls Virat Kohli, MS Dhoni and Others by Sharing Their Gender-Swap Pictures, Asks Fans 'Who Will You Select As Your Girlfriend?' (View Post).

The poll also saw Gavaskar and Kohli battle for the third-place play-off which eventually went to the latter. Interestingly, Tendulkar, Dravid and Gavaskar are India’s top run-scorers in Test cricket. Tendulkar is on numero uno position with 15921 runs, Dravid second with 13265 runs and Gavaskar on third with 10122 runs.

(The above story first appeared on LatestLY on Jun 24, 2020 10:59 AM IST. For more news and updates on politics, world, sports, entertainment and lifestyle, log on to our website latestly.com).