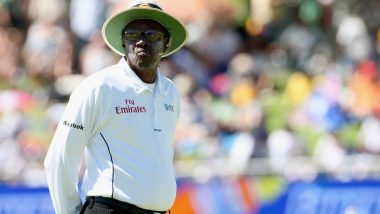 Bucknor spoke about the match at Gabba in 2003 when he adjudged Tendulkar out LBW but now agreed that the Jason Gillespie delivery was going over the wickets. He also recounted the incident when he thought Tendulkar had edged an Abdul Razzaq delivery into the hands of the wicket-keeper in 2005 at the iconic Eden Gardens. Sachin Tendulkar Celebrates Father’s Day and International Yoga Day With Son Arjun and Daughter Sara (View Post).

"Tendulkar was given out on two different occasions when those were mistakes. I do not think any umpire would want to do a wrong thing. It lives with him and his future could be jeopardised," Bucknor said on Mason and Guests radio programme in Barbados.

"To err is humanï¿½Once in Australia, I gave him out leg before wicket and the ball was going over the top. Another time, in India it was caught behind. The ball deviated after passing the bat but there was no touch. But the match was at Eden Gardens and when you are at the Eden and India is batting, you hear nothing.

"Because 100,000 spectators are making noise. Those were the mistakes and I was unhappy. I am saying a human is going to make mistakes and accepting mistakes are part of life," he added.

Bucknor, who is regarded as one of the finest umpires ever to officiate in the game, also spoke about the importance of technology in the sport. He feels that review systems helps in giving correct decisions more often than not and that is better for the sport overall and not just the officials.

"I am not certain if it affects the confidence of umpires, but I know it has improved umpiring," Bucknor said.

"It has improved umpiring because there was a time when we were saying the batsman was so-called playing down the line, therefore he is not going to be given out leg before, but if the technology is saying the ball is hitting, then you have to give him out. So, we learn from the technology.

"The umpires who do not enjoy having technology around, I hope that they have a rethink. What it does if you make a mistake it can be corrected on the field," Bucknor said.

"Now thinking about when I was umpiring and I gave a batsman out who was not out, realizing I made a mistake it took a long time to fall asleep that night. Now you can fall asleep quickly because the correct decision is eventually given."

(The above story first appeared on LatestLY on Jun 21, 2020 06:28 PM IST. For more news and updates on politics, world, sports, entertainment and lifestyle, log on to our website latestly.com).