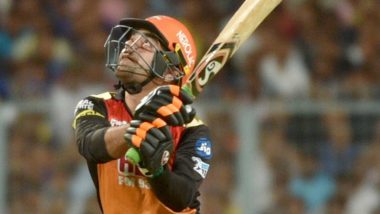 Rashid Khan and Steve Smith are two of the finest players of the modern era and are considered as the best at what they do by many around the world. On June 2, 2020, Australian batsman Steven Smith celebrated his 31st birthday, and Afghanistan’s spin wizard Rashid Khan had a unique way of wishing him as he copied the Sydney-born cricketers batting style and pretty much aced it. Steve Smith Fans Trend #HBDSteveUnstoppableSmith on Twitter As Australian Batting Great Turns 31.

On Steve Smith’s birthday, Indian Premier League side SunRisers Hyderabad shared a video of Rashid Khan trying his best to impersonate the Australian cricket as they wished him on his special day. ‘Rashid Khan doing his best to Steve Smith impression on Aussie’s birthday today! Have a good one, Steve!’ the 2016 IPL champions captioned their post. Shane Warne, Rashid Khan Bowling Together; Decode the Art of Leg-Spin: Watch Video.

Despite starting his career as a leg spinner, over the years, Steve Smith has evolved himself into one of the most dominant batsmen in the game, mostly asserting his supremacy in the longest format. The 31-year-old has drawn a lot of attention towards him because of his unusual batting style, which has made him a nightmare for several bowlers around the world.

Steve Smith is currently the number one ranked Test batsman in the world and has been hailed by many as the ‘best since Sir Don Bradman’ due to his distinctively high average in Tests. Just like the former Australian great, Smith has also applied his unorthodox style of batting to great use, establishing himself as one of the all-time greats.

(The above story first appeared on LatestLY on Jun 03, 2020 06:14 PM IST. For more news and updates on politics, world, sports, entertainment and lifestyle, log on to our website latestly.com).