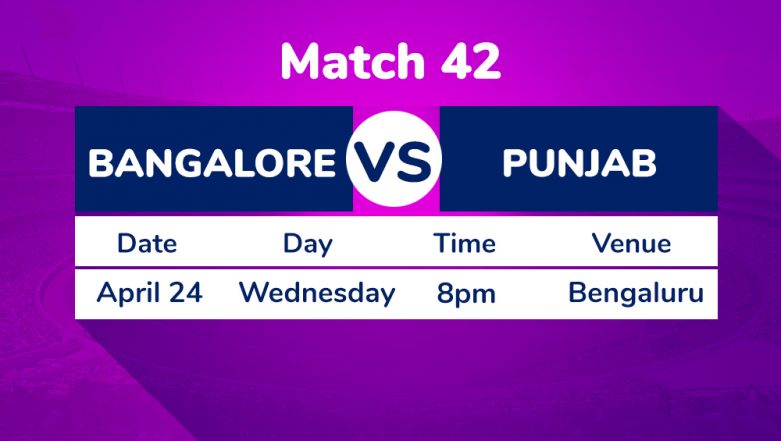 Bengaluru, April 23: With two back to back wins, Royal Challengers Bangalore (RCB) will aim for yet another victory and keep their slim chances of making it to the playoffs alive when they take on the Kings XI Punjab (KXIP) in the ongoing edition of the Indian Premier League (IPL) at the Chinnaswamy Stadium, here on Wednesday. RCB would take a lot of confidence from their last victory against the Chennai Super Kings (CSK) which they registered despite heroics from MS Dhoni in a nail-biting clash.

The inclusion of Dale Steyn has strengthened their bowling attack who is not only providing the early breakthroughs but also is instilling confidence in others bowlers like Umesh Yadav and Navdeep Saini. Their batting boasts off having world class batters like Virat Kohli and AB de Villiers, who have been in good form in the tournament. KXIP, on the other hand, lost their previous game against the Delhi Capitals at the Feroz Shah Kotla in the national capital. Royal Challengers Bangalore vs Kings XI Punjab Live Cricket Score 42th T20 Match.

Apart from KL Rahul and Chris Gayle, their batsmen have not been performing -- a worrying sign for the Punjab-based franchise who are at the fifth position in the points table. Their bowling has also been not great with bowlers leaking runs and not picking up wickets at crucial junctures of the game. RCB would be the more confident side going into the match, having beaten the KXIP the last time these two teams met at IS Bindra Stadium in Mohali on April 13.