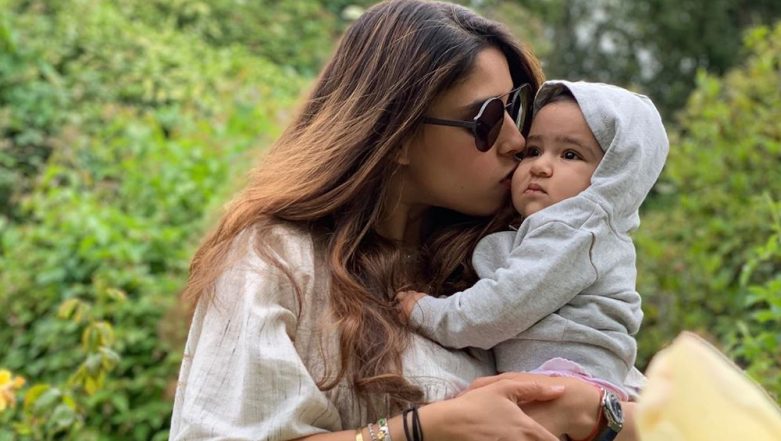 Indian cricketer Rohit Sharma on Sunday shared a cute photo of his wife Ritika Sajdeh and daughter Samaira. In the photo, shared by the Indian opener on his Instagram account, his ladylove Ritika can be seen kissing Samaira. She can be seen standing in a nature-friendly spot, with flowers and greenery all around her. The Indian ODI vice-captain also came up with a heart-warming caption for the post. The right-handed batsman wrote along with the photo, “My two pies”. Have a look at Sharma’s sweet Instagram post below. Rohit Sharma Shares Pic of Wife Ritika Sajdeh Praying With 'Crossed Fingers' With Daughter Samaira During IND vs SL Match With a Special Caption, See Pic.

Sharma married Ritika in April 2015. Their daughter Samaira was born on December 30, 2018. Ritika and her daughter also accompanied Sharma to England during World Cup 2019, in which India lost to New Zealand in semi-finals by 18 runs. Sharma was spectacular with the bat during the tournament, scoring 648 runs along with record five centuries. Rohit Sharma Arrives in India Along With Wife Ritika Sajdeh and Daughter Samaira Following Indian Cricket Team's CWC 2019 Exit, Watch Video.

Earlier, the lady Sharma was seen praying during India's match against Sri Lanka in the group stage of World Cup 2019 for her husband as he was on the verge of smashing his fifth century in the tournament. The photo of Ritika with daughter Samaiya praying for Rohit with crossed fingers was shared by Sharma on Twitter. "Nothing can beat this, when your loved ones are up there in the stands rooting for you with fingers crossed," wrote Rohit had written to caption the photo.