After a poor finish last season, Rajasthan Royals added some quality players to their squad as the likes of Robin Uthappa, Oshane Thomas, Andrew Tye, Tom Curran and Katik Tyagi were brought in by the franchise during the player auction in December last year. We take a look at how the Rajasthan side might set up for their opening IPL 2020 game. 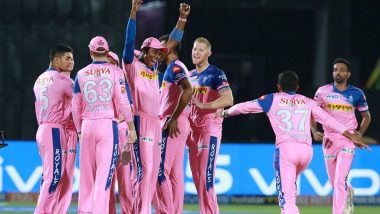 Rajasthan Royals will begin the quest for a second IPL title when they take on three-time champions Chennai Super Kings in their opening fixture of the new Indian Premier League season. The clash will be played at the Sharjah Cricket Stadium on September 22, 2020. Steve Smith has replaced Ajinkya Rahane as the captain of the team, as the Indian cricketer moved to Delhi before the start of IPL 2020. RR Squad for IPL 2020 in UAE: Check Updated Players' List of Rajasthan Royals Team Led by Steve Smith for Indian Premier League Season 13.

After a poor finish last season, Rajasthan Royals added some quality players to their squad as the likes of Robin Uthappa, Oshane Thomas, Andrew Tye, Tom Curran and Katik Tyagi were brought in by the franchise during the player auction in December last year.  So before RR begin the latest IPL season against CSK under a new skipper, we take a look at how the inaugural champions might set up for the game. RR Team Profile for IPL 2020: Rajasthan Royals Squad in UAE, Stats & Records and Full List of Players Ahead of Indian Premier League Season 13.

Openers: Rajasthan are likely to be without regular opener Jos Buttler for the first game as he will in quarantine after landing in UAR from international duty. Hence, wicket-keeper batsman, Sanju Samson will take his place and he is likely to be partnered by India’s 2020 U-19 World Cup campaign hero Yashasvi Jaiswal.

Middle Order: Due to Steve Smith’s absence, former KXIP player Manan Vohra could be given a start in the first game of the competition. Newcomer Robin Uthappa could be used in the number four spot who is expected to be followed by South African David Miller.

All-Rounders: Riyan Parag, the find from last-seasons IPL for RR, will once again hope to impress this year as well. Parag became the youngest player to score a fifty in the history of the competition. The youngster also has two wickets to his name. So in the absence of Ben Stokes, could be the team's only all-rounder in this game.

Bowlers: Shreyas Gopal and Mayank Markande are expected to start as the specialist for Rajasthan against the three-time champions. Gujarat-born pacer Jaydev Unadkat will lead the bowling attack for the team and will be supported by Australian Andrew Tye and Ankit Rajpoot.

Rajasthan Royals are a balanced side and with new skipper, Steve Smith leading the side they will fancy their chances of lifting the trophy for the first time since the inaugural season and a win against three-time champions CSK, will boost their confidence.

(The above story first appeared on LatestLY on Sep 17, 2020 03:23 PM IST. For more news and updates on politics, world, sports, entertainment and lifestyle, log on to our website latestly.com).