After winning the inaugural edition of the tournament in 2008, the Rajasthan-based team hasn’t been even to reach the finals even once. They have a knack of losing the plot in the middle even after getting a good start in the season. However, they would like to change their fortunes in the upcoming season under the leadership of Steve Smith. 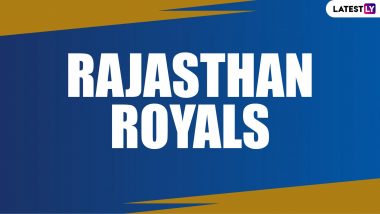 Rajasthan Royals will aim to clinch their second title in the forthcoming edition of the Indian Premier League (IPL 2020). After winning the inaugural edition of the tournament in 2008, the Rajasthan-based team hasn’t been even to reach the finals even once. They have a knack of losing the plot in the middle even after getting a good start in the season. However, they would like to change their fortunes in the upcoming season under the leadership of Steve Smith. Below, we’ll look at the previous performances, records, key players and squad of Rajasthan Royals. RR Squad for IPL 2020 in UAE: Check Updated Players' List of Rajasthan Royals Team Led by Steve Smith.

With Ajinkya Rahane parting ways with RR after nine seasons, it will be interesting to see the side’s top-order formation. Also, Smith, who guided the now-defunct Rising Pune Supergiant to IPL 2017 Finals, will have to lead from the front to guide the Men in Pink to the prestigious trophy. Other than Smith, Rajasthan Royals have the services of Robin Uthappa, Jos Buttler, Sanju Samson and Yashasvi Jaiswal in the batting department. At the same time, Jaydev Unadkat, Varun Aaron and Shreyas Gopal will have the onus to take wickets. Rajasthan Royals Team SWOT Analysis: Ahead of IPL 2020 Find Out Positives And Negatives of Steve Smith’s RR.

Well, the team certainly looks quite balance at the moment. However, the lack of back-ups might hurt the team in the long-running tournament. With Krishnappa Gowtham being transferred to Kings XI Punjab, the side lacks a quality all-rounder other than Ben Stokes. Also, the likes of Aaron and Unadkat have been accused of leading runs in the death run, which will be a major concern for the team. Nevertheless, RR have some great youngsters in the form of Yashasvi Jaiswal, Kartik Tyagi and Riyan Parag who will be determined to make a mark in the gala tournament.

Key Players: Jos Buttler has performed brilliantly for RR in the last couple of seasons, and the opposition bowlers must be aware of his abilities. Other than him, Robin Uthappa, Riyan Parag, Steve Smith, Yashasvi Jaiswal, Ben Stokes, David Miller, Jofra Archer and Sanju Samson are the other key players in the team.

The Rajasthan-based team have participated in 147 IPL matches so far and won 73 of them. During this time, three of their games ended in a tie while two fixtures got called off. They faced 69 defeats in IPL while their win percentage is 51.37. They enjoyed campaign in 2008 where they went on to clinch the trophy while they advanced to the playoffs four times.

Most Runs and Wickets For RR: Veteran batsman Ajinkya Rahane is the highest run-scorer for Rajasthan Royals in IPL. In 106 matches, the star opener scored 3098 runs at an impressive average of 35.60. Rahane also smashed two centuries and 21 half-centuries for RR. On the other hand, Shane Watson is the most successful bowler for RR to date. The all-rounder scalped 67 wickets in 84 matches at an economy rate of 7.55.

(The above story first appeared on LatestLY on Aug 30, 2020 03:00 PM IST. For more news and updates on politics, world, sports, entertainment and lifestyle, log on to our website latestly.com).