Sachin Tendulkar Birthday Special: 10 Memorable Quotes on the Master Blaster by Legends of the Game

The master blaster owns almost every important batting record but his conduct both on and off the field increased his popularity and made him even more endearing to fans and cricketers world over. On his 49th birthday, we bring to you some memorable quotes on the 'God of Cricket' by those who have played against him or watched him grow 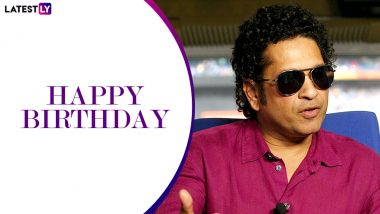 Sachin Tendulkar is not just a name but also an emotion! The master blaster turns 49 today (April 24, 2022) and though it has been more than five years since he retired, fans and cricket lovers in general still remember the master blaster for his timeless batting and down to earth persona. On his 49th birthday, we bring to you some memorable quotes on the 'God of Cricket' by those who have played against him or watched him grow from a batting prodigy into a cricketing legend. Sachin Tendulkar Birthday Special: When Master Blaster Unleashed 'Desert Storm' in Sharjah Against Australia (Watch Video).

Sachin has often been termed as the most complete batsmen of all time, not just by fans and experts, but also by his contemporaries and other cricketers. In his 24-year-long career, the batting maestro played numerous shots and innings that have become immortal in the hearts of fans. He was loved irrespective of where and who he played against and was adored even by his opponents who loved to see his back and get him out early. A mark of a truly great is how his peers and other greats from his field of work evaluate the person. In Sachin's case, the legend has been praised in great measure by cricketers from the past as well as the present. Sachin Tendulkar Rewinds to Childhood by Posing With Mumbai’s BEST Bus (See Pic).

Below Are 10 Memorable Quotes on Sachin Tendulkar

1. Andy Flower Made the Distinction Between Sachin and Other Batsmen Crystal Clear 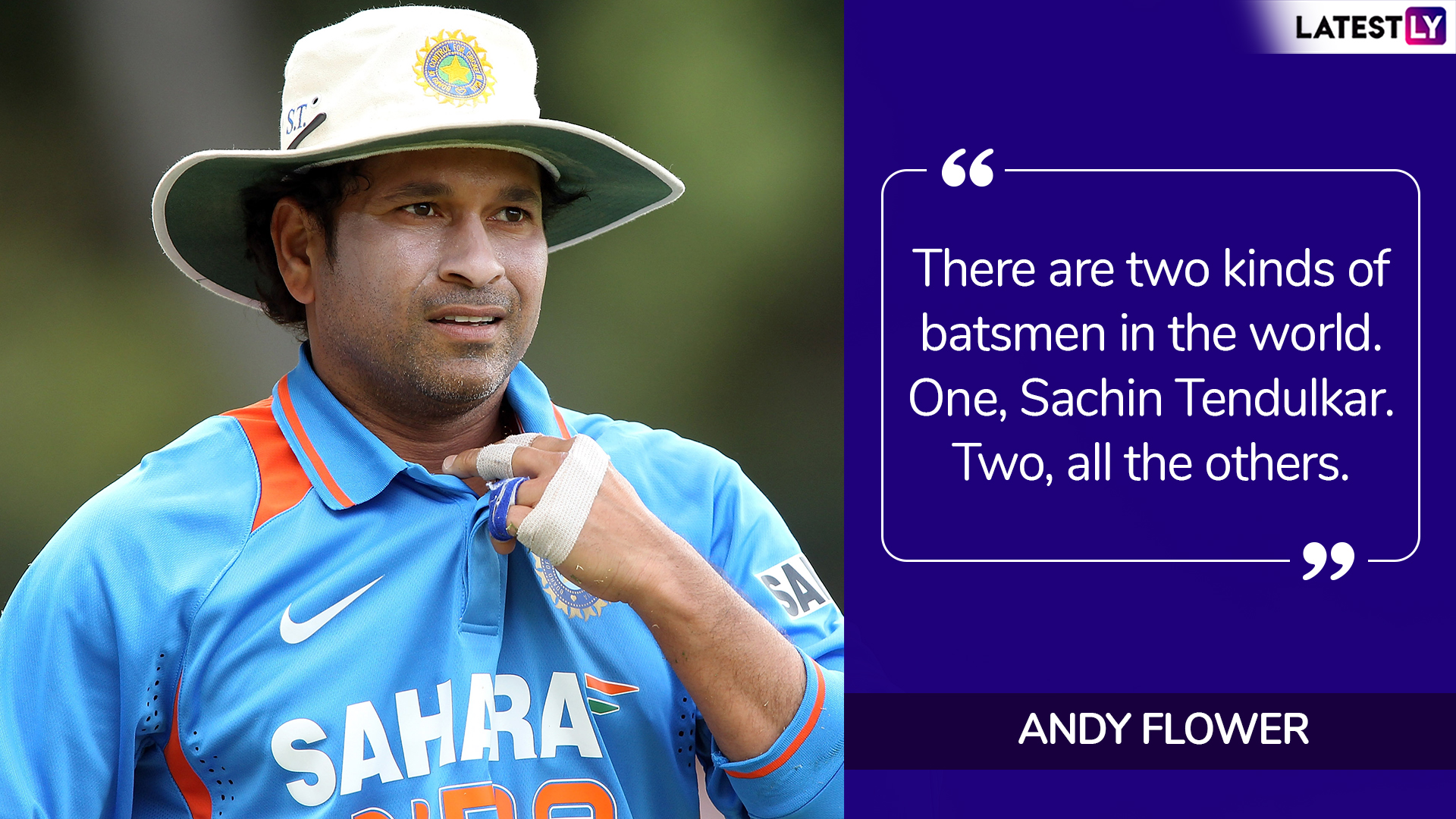 2. Matthew Hayden Saw 'God' Bat For India at No 4 Position (in Tests) 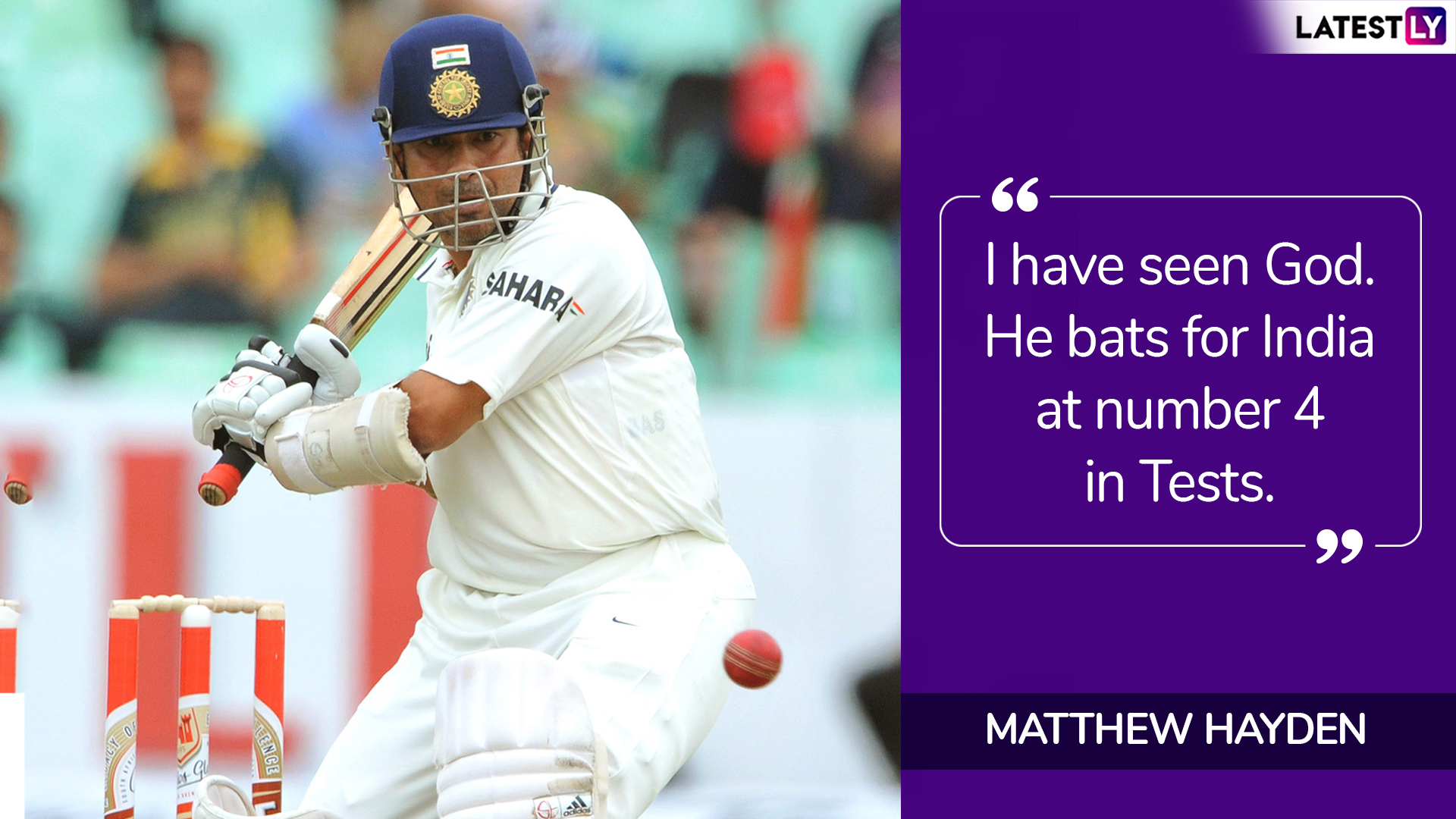 3. The Greatest Ever, Sir Donald Bradman, Saw Himself in Sachin 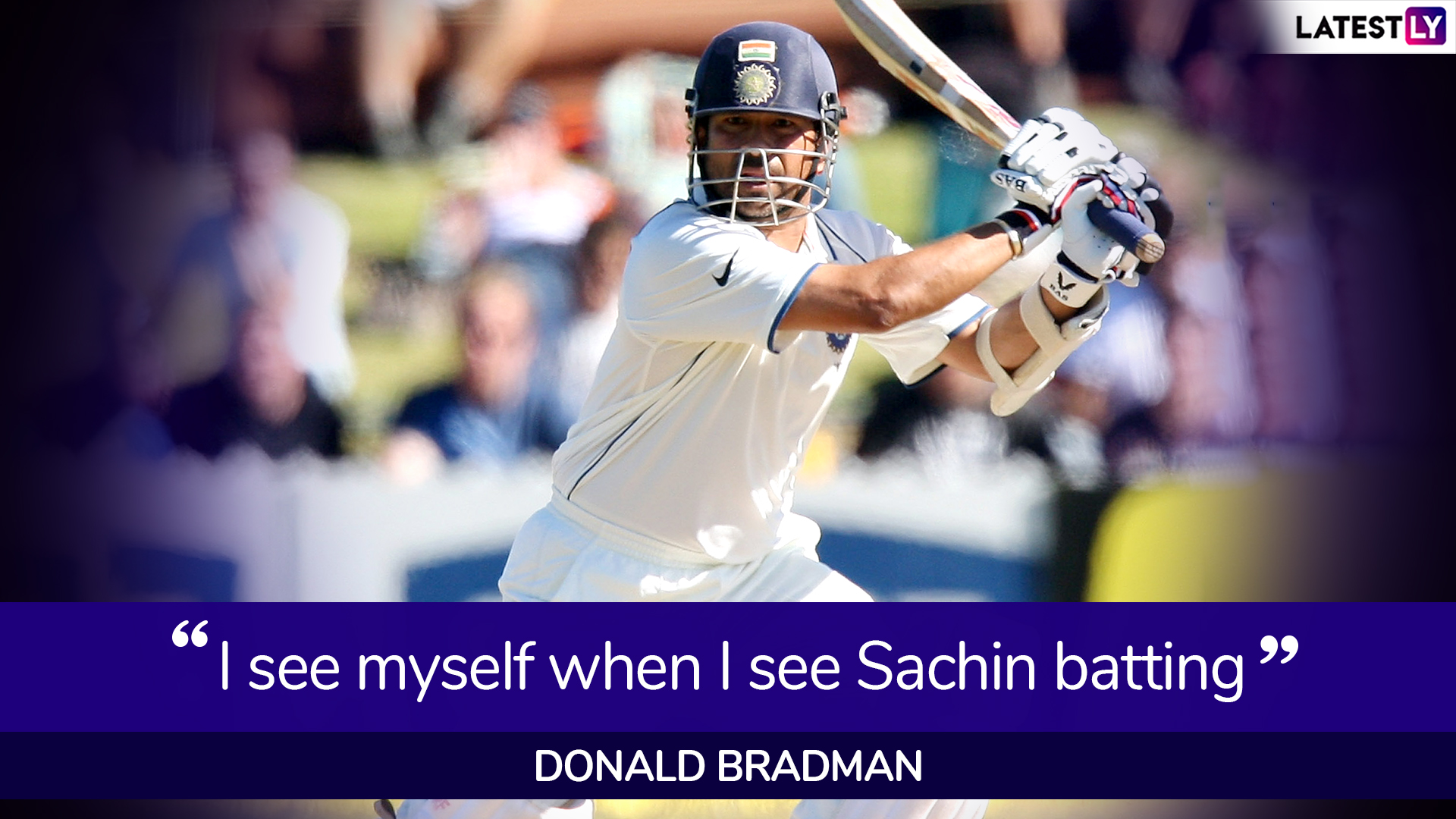 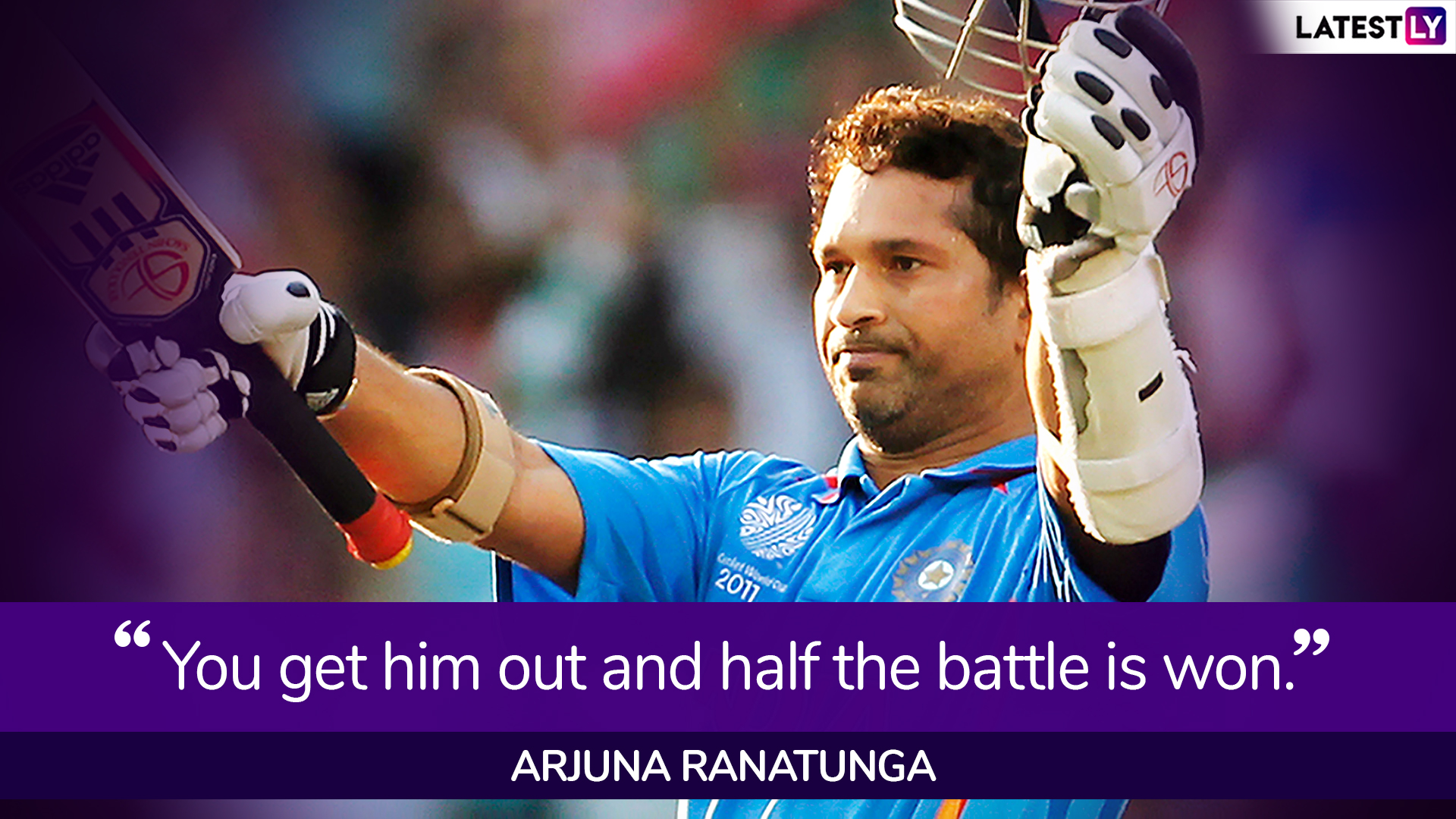 5. The Stylish Brian Lara Called Himself a Mere Mortal on Comparisons With Sachin 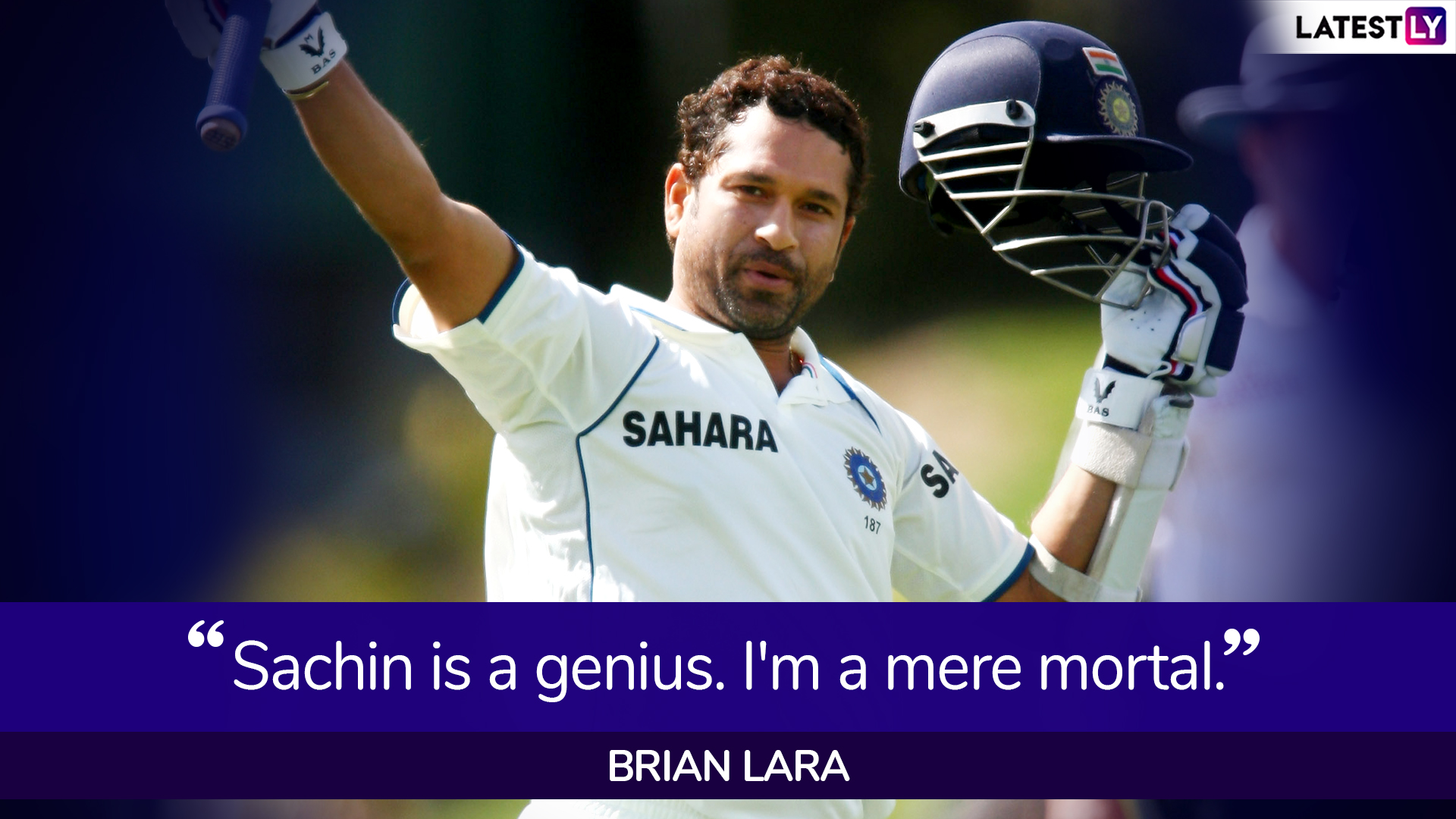 6. A Fan at the SCG Said it All Through a Placard 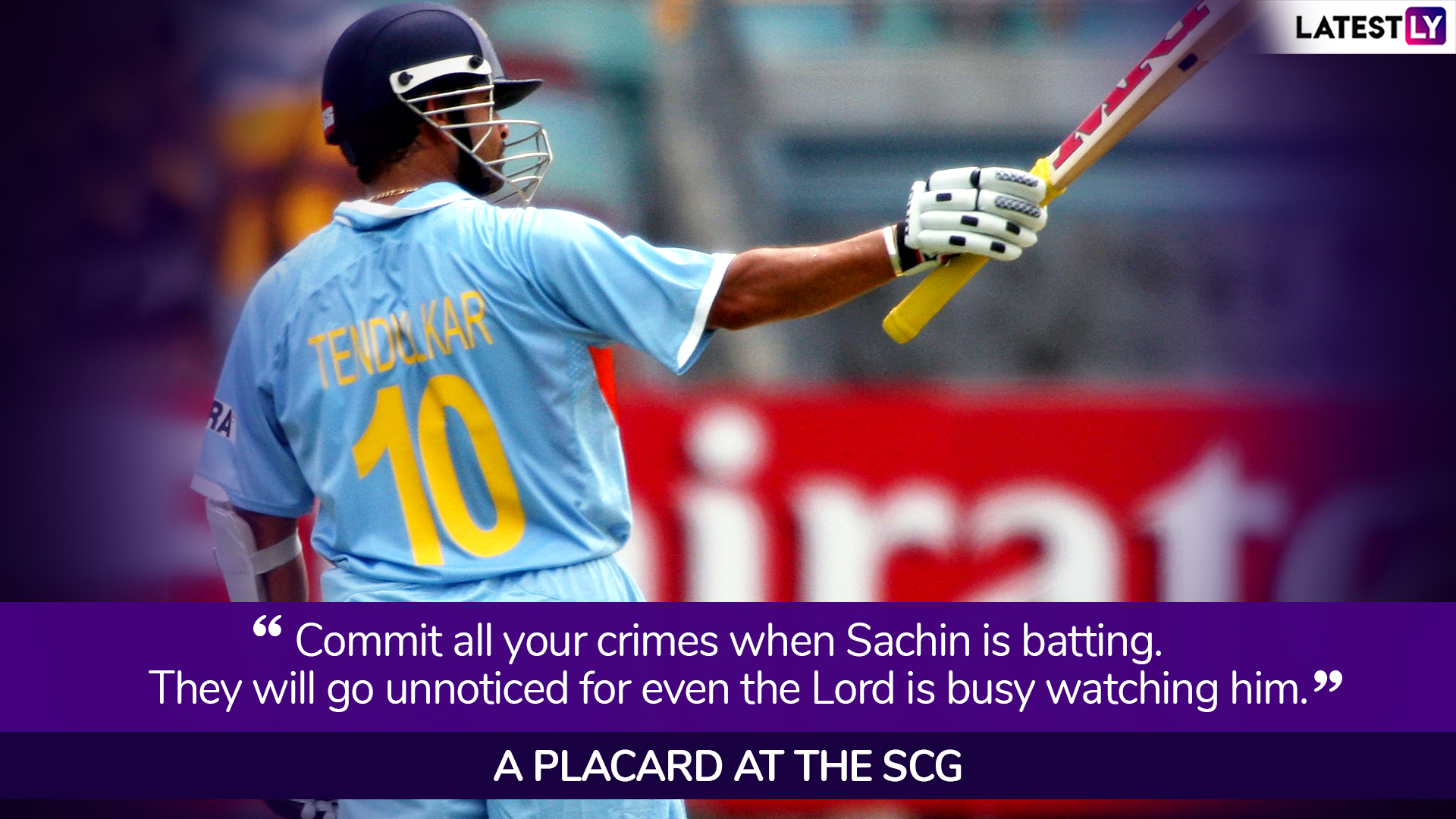 A fan puts out a message for Sachin at SCG. (Photo Credits: File Image)

7. Spin Legend Anil Kumble Said He is Lucky He Didn't Have to Bowl at Him in an Actual Match 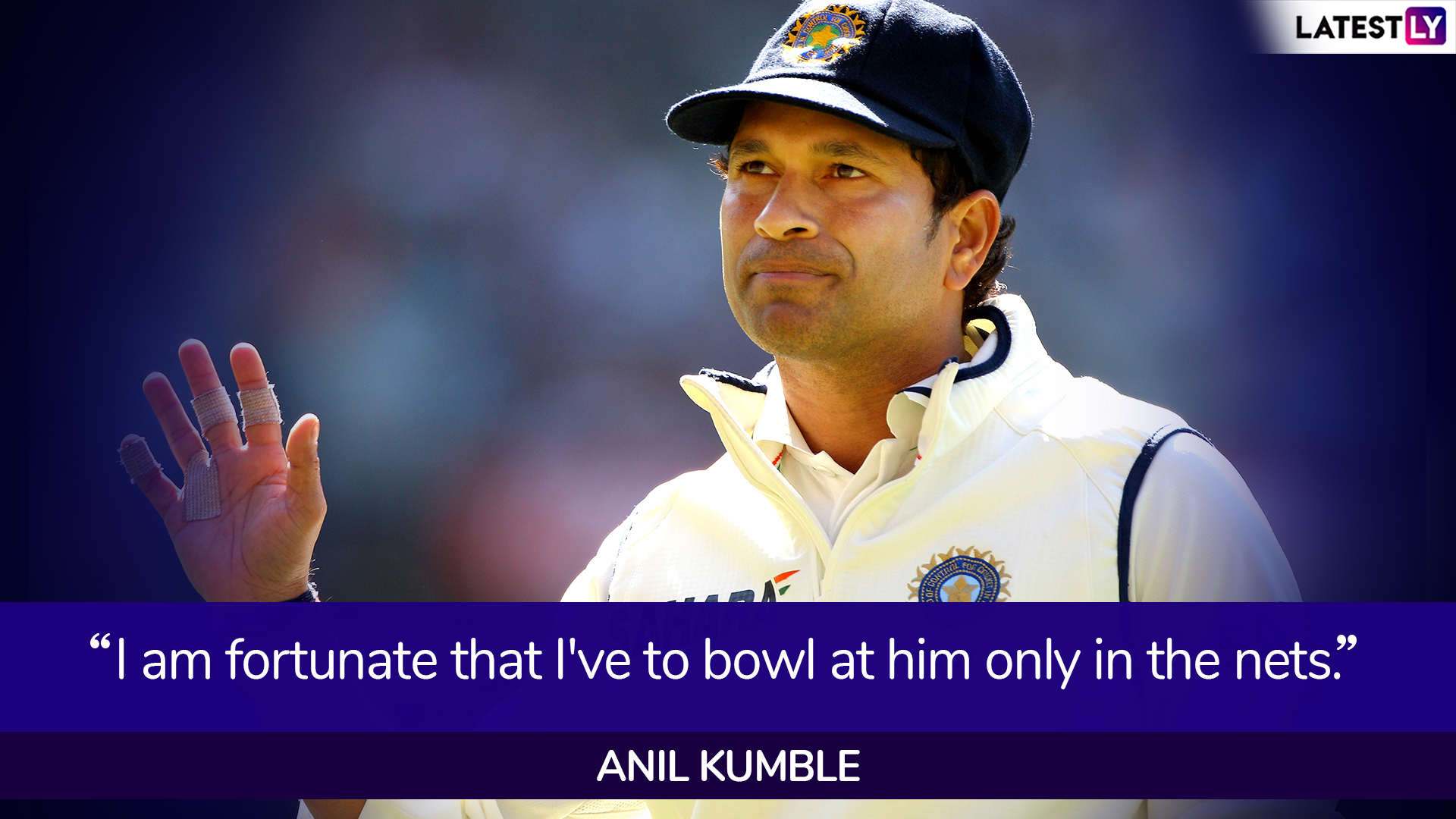 8. The Great Wasim Akram Feels He is Privileged He Played in Sachin's Time 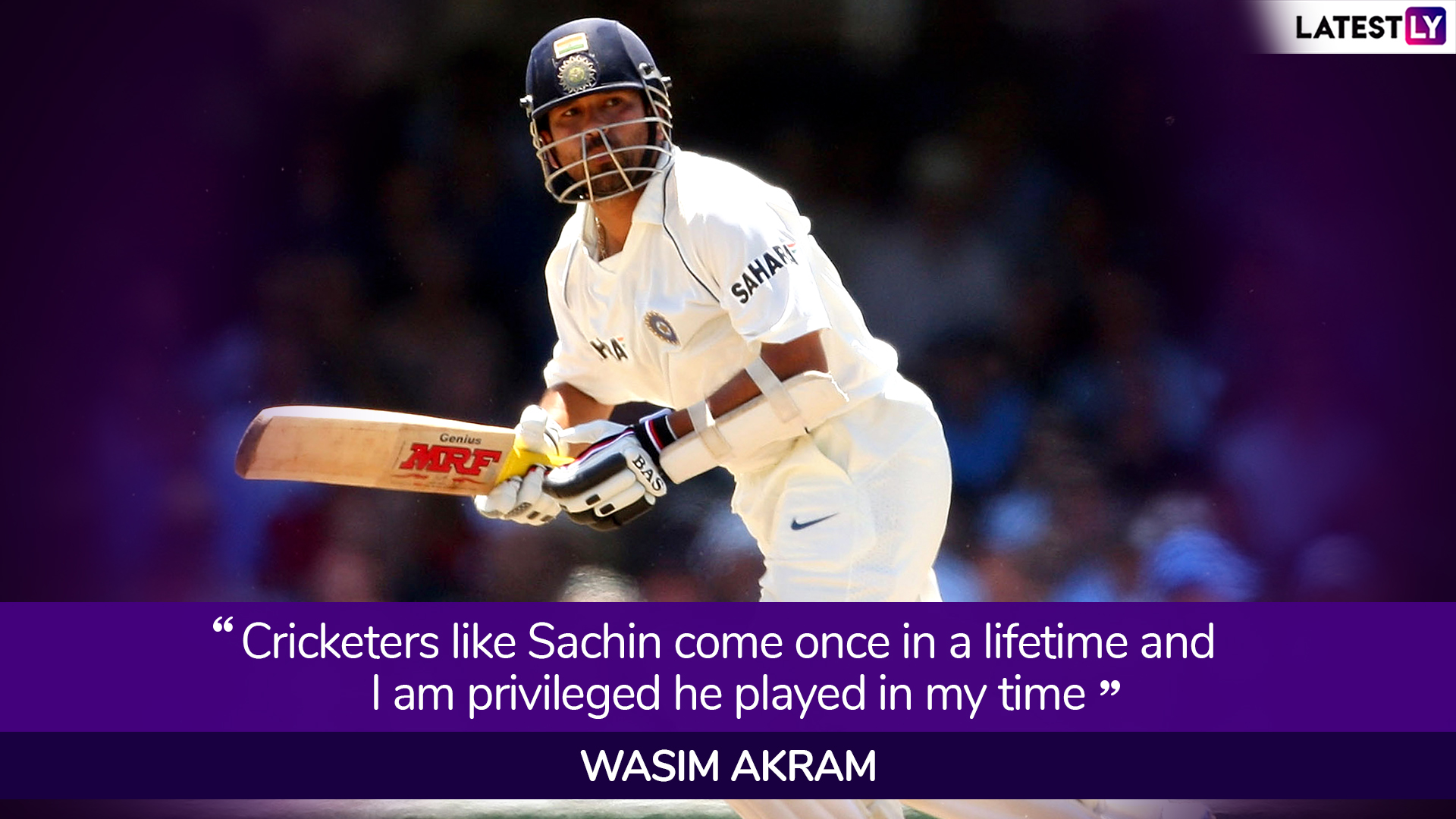 9. Harsha Bhogle With His Spot On Analysis 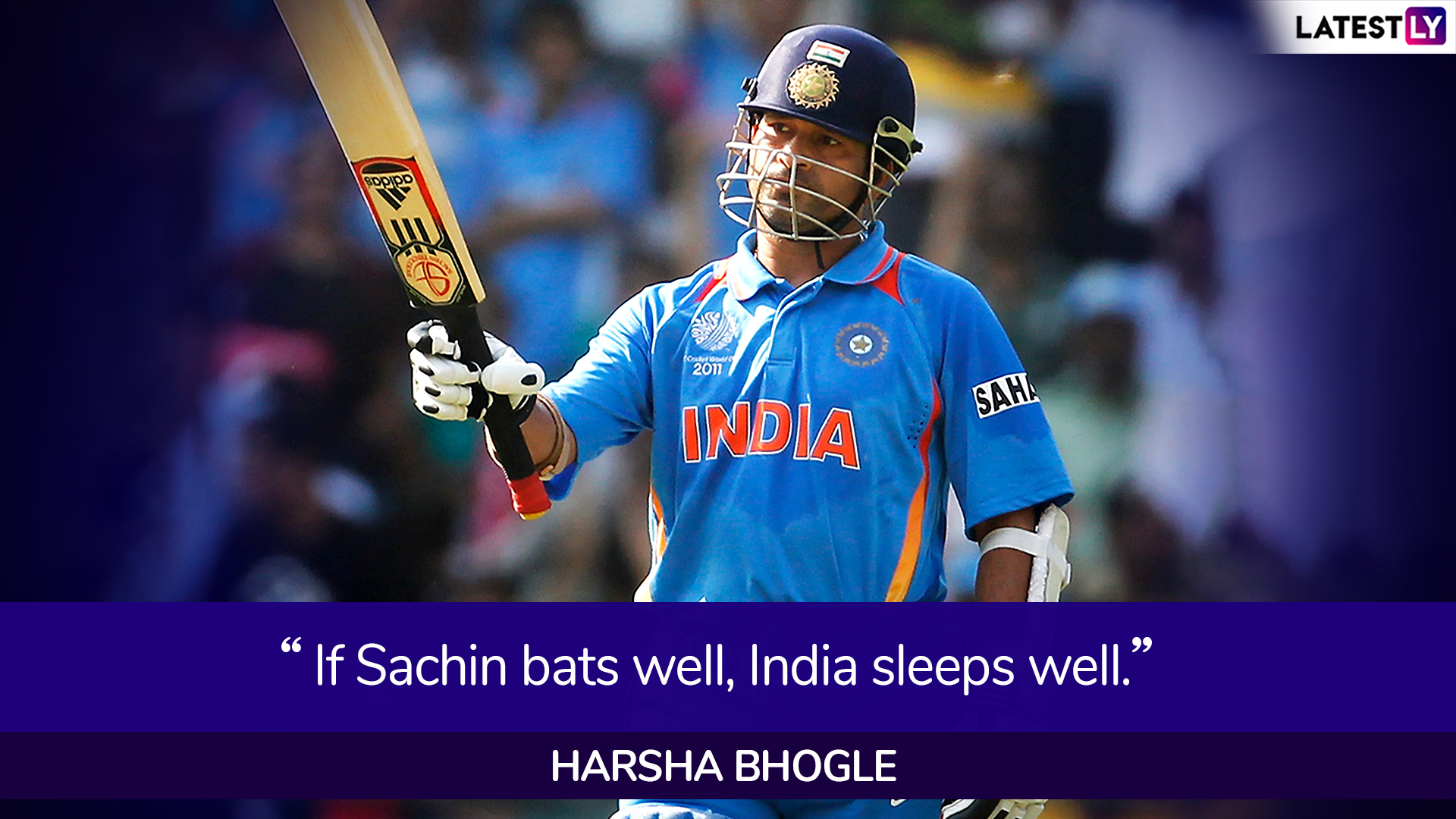 10. Time Magazine Described Sachin as He Should Be 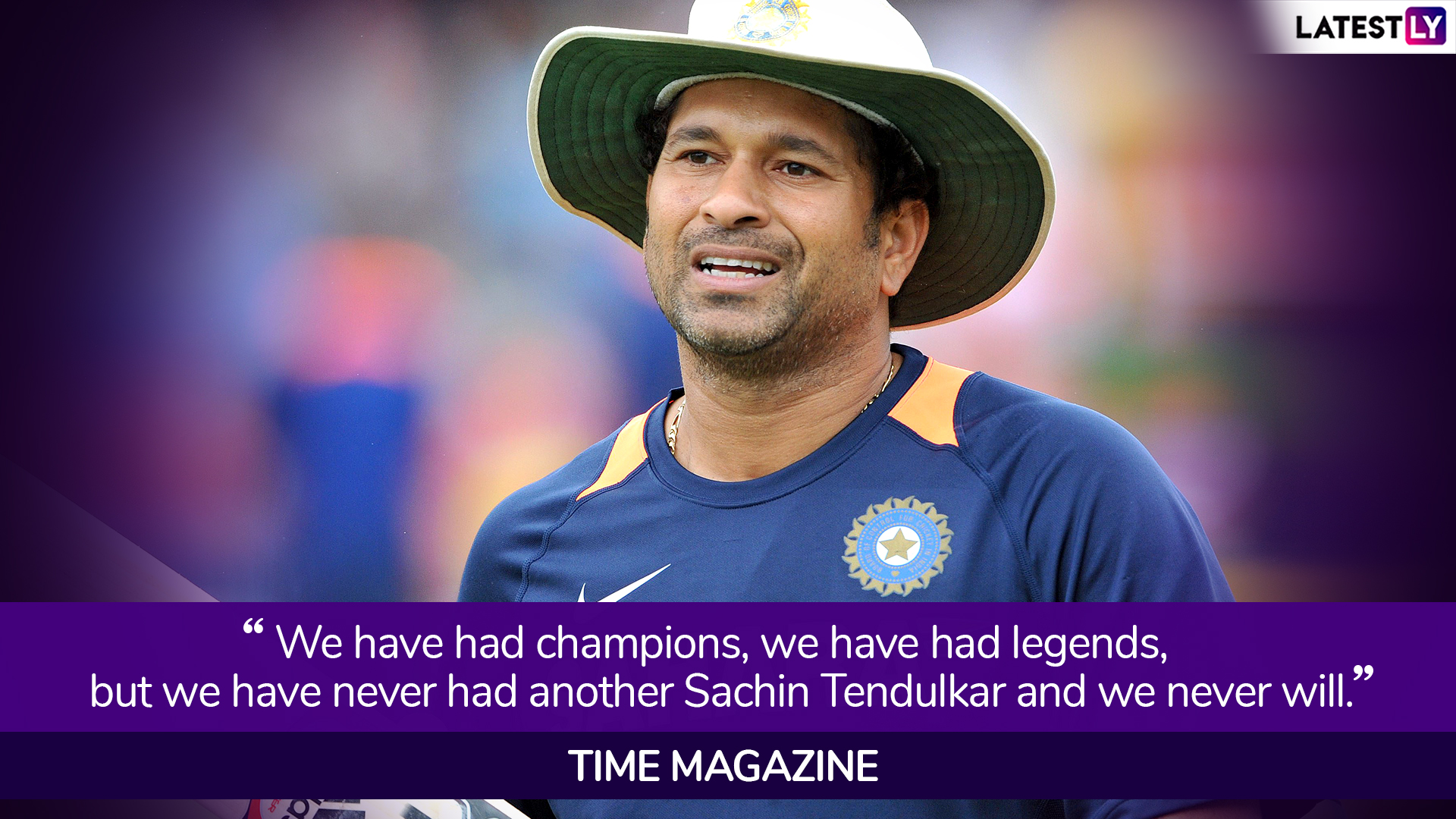 These are but a few quotes that the legends and prominent observers of the game of Cricket said about Sachin. But ask any cricket fan who has had the pleasure to watch the master's knock and they will tell you that Sachin is beyond words. The master blaster owns almost every important batting record but his conduct both on and off the field increased his popularity and made him even more endearing to fans worldover. Here's wishing Bharat Ratna Sachin Tendulkar a very happy 49th birthday.

(The above story first appeared on LatestLY on Apr 24, 2022 08:45 AM IST. For more news and updates on politics, world, sports, entertainment and lifestyle, log on to our website latestly.com).