Sarfaraz Ahmed Mourns the Death of Test Umpire Riazuddin; Team To Wear Black Bands for the CWC 2019 PAK vs AUS 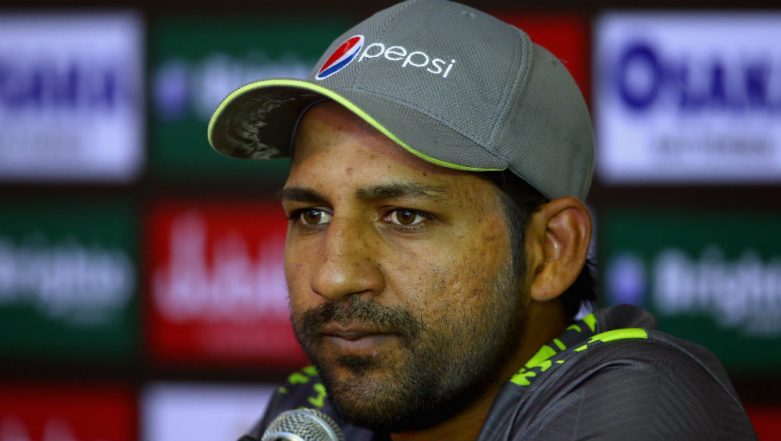 Sarfaraz Ahmed and the team will step on to The Cooper Associates County Ground in Taunton today to take on Australia for the 17th game of ICC Cricket World Cup 2019. However, the team will be spotted wearing black bands during the match to mourn the death of their umpire Riazuddin. Sarfaraz Ahmed informed the same during the toss and the 60-year-old passed away due to a cardiac arrest. Riazuddin had officiated 12 Test matches from 1990-2002. His last Test match was between Pakistan and the West Indies at Sharjah held from January 31 to February 4, 2002. Australia vs Pakistan Cricket Score 17th ODI Match.

During the toss, Ahmed said, “One of our Test umpires (Riazuddin) has passed away, and in honour of him, we're all going to wear black bands today.” Talking about the game, Pakistan won the toss and elected to bowl first. Sarfaraz Ahmed and team wanted to take advantage of moisture on the pitch. Australia too was looking forward to bowl first. AUS vs PAK, ICC CWC 2019 Toss Report & Playing XI: Pakistan Opt to Bowl First, Shaheen Afridi Replaces Shadab Khan.

Talking about the teams’ head-to-head record, out of the last 14 ODIs in the last five years, the Men in Yellow won 13 games. Talking about their respective last games, Pakistan was to face Sri Lanka in their last game, but the match was called off due to rains without a single ball being bowled. On the other hand, Australia lost their last match against India by 35 runs.  Pakistan is placed on number eight of the ICC Cricket 2019 Points Table, whereas, Australia is on number four.