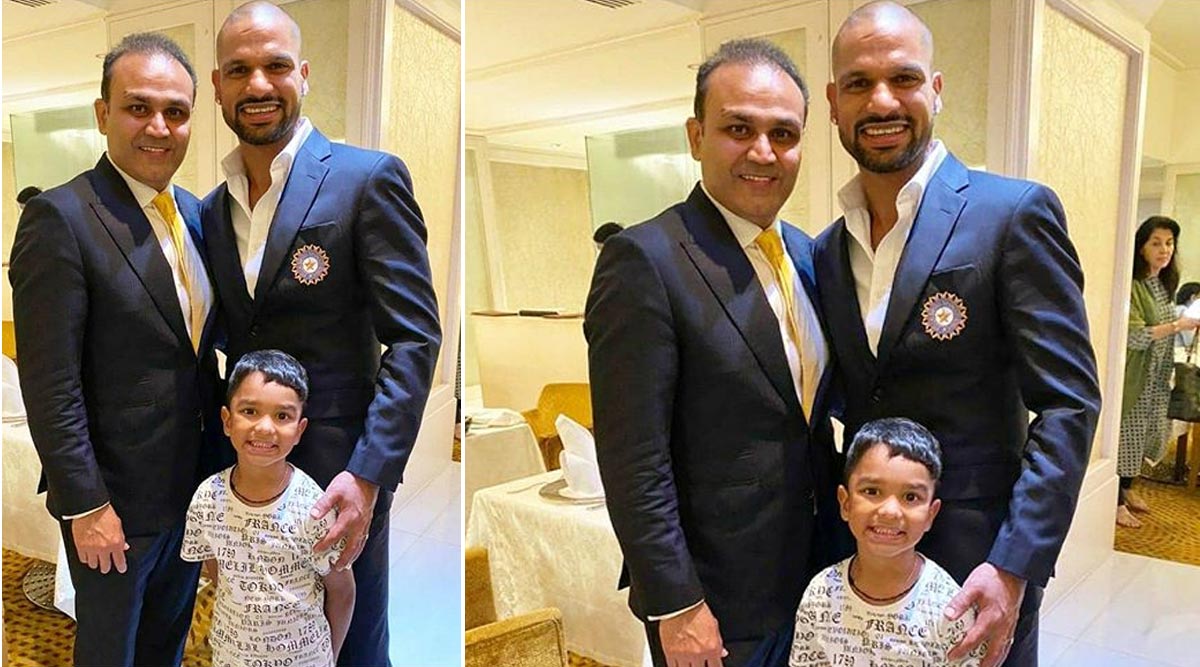 India’s swashbuckling opener Shikhar Dhawan has been quite active on social media in recent times and is often seen sharing pictures and videos with his fans. In his latest Instagram post, the left-handed batsman was seen posing with India’s former opener Virender Sehwag and his son Zoravar. The snap seemed to be captured at the BCCI Annual Awards which took place in Mumbai on January 12 and Dhawan posted the picture with an interesting caption. Shikhar Dhawan Gives Batting Tips to Son Zoravar.

“Mine and Zoraver's face after getting the #ViruGyaan” read the caption of the picture shared by Dhawan on Instagram. Both Dhawan and Sehwag are hailing from Delhi and have played a lot of cricket together. They even shared dressing rooms for Delhi Daredevils (now Delhi Capitals) in the inaugural season of Indian Premier League (IPL). Well, the two former teammates seem to share a warm relationship and it can, certainly, be seen in the picture posted by Dhawan. Shikhar Dhawan Trolls Cheteshwar Pujara for His Running Between the Wickets.

The two openers have quite similar personalities and their playing style is different either. In fact, after Sehwag’s departure from the national side, it was Dhawan only who took the onus of giving India a flying start and the dasher certainly has filled the boots of the former.

Dhawan will be next seen in action during the three-match ODI series between India and Australia which will get underway on January 14 at the Wankhade Stadium in Mumbai. The opener, recently, made a comeback against Sri Lanka after recovering from injury and will eye to perform consistently in order to remain India’s first-choice opener in white-ball cricket.