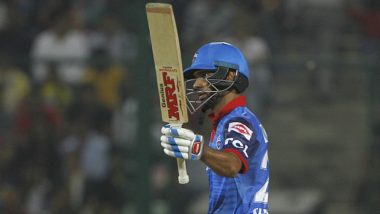 Shikhar Dhawan unleashed absolute mayhem against Chennai Super Kings and brought up his maiden century in Indian Premier League (IPL). Chasing 180 at the Sharjah Cricket Stadium, the southpaw didn’t get much support from the other end, but he stood as a lone warrior and smashed boundaries and sixes all over the park. Often criticized for his strike rate in the T20 format, Dhawan went absolutely berserk after settling his feet in the wicket. From Sam Curran to Deepak Chahar, the left-handed batsman smashed every bowler all over the park and went to the three-figure mark. DC vs CSK Highlights Dream11 IPL 2020.

The veteran batsman, who was playing his 168th game, came closer to the landmark of many previous occasions but never reached the three-figure. He also got a couple of lifelines by CSK fielders, and he made utilization of it. In fact, he was adjudged out of Sam Curran’s delivery on 99, but he reviewed the decision and survived. He went to the landmark in the next delivery with a single. Kagiso Rabada Surpasses Sunil Narine to Become Fastest Bowler to Scalp 50 Wickets in IPL History.

Riding on his efforts, Delhi Capitals won the match by four wickets and went at the pinnacle of the team standings. Needing 17 runs off the last over, Axar Patel smashed Ravindra Jadeja for three giant sixes, taking his team over the line.

Earlier in the day, CSK skipper MS Dhoni won the toss and elected to bat first in Sharjah. Faf du Plessis scored a stellar half-century upfront while Ambati Rayudu and Ravindra Jadeja gave the team late flourishes. As a result, the Yellow Army posted 179/4. The target is challenging indeed but with Shikhar Dhawan, Shreyas Iyer and Marcus Stoinis in ranks, DC must back themselves to cross the line.

(The above story first appeared on LatestLY on Oct 17, 2020 11:31 PM IST. For more news and updates on politics, world, sports, entertainment and lifestyle, log on to our website latestly.com).