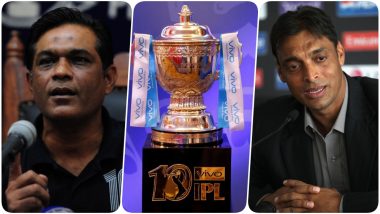 Not a very long time ago, the ICC took the decision of cancelling the 2020 T20 World Cup which was supposed to happen in Australia later this year. The decision was taken keeping in mind the pandemic created due to the coronavirus. Now this decision by the ICC hasn’t gone down well with Pakistani players like Shoaib Akhtar and Rashid Latif who alleged that the ICC had cancelled the T20 World Cup for the IPL 2020. They went on to lash out at the ICC for the same and the Rawalpindi Express took a jibe at the BCCI during an interview with a channel in Pakistan. Chris Lynn Feels T20 World Cup 2020 Should Be Cancelled, Says Tournament Is Going to Be a Logistical Nightmare in Times of Coronavirus.

Shoaib said that he both Asia Cup 2020 and T20 World Cup be played this year but he knew that the ICC wouldn' let it happen and further blamed IPL for the same.“T20 WC could have been played but I and Rashid have said this repeatedly that they won’t let it happen, it won’t happen. IPL shouldn’t get damaged, the T20 World Cup can go to hell. India needs to save cricket immediately otherwise it won’t affect my era," he said during an interview.

Whereas Rashid Latif also went on to question the BCCI President Sourav Ganguly as he made the announcement about the cancellation of the Asia Cup 2020 even before it was made official. He further explained that all the boards would benefit from the cancellation of the T20 World Cup. " BCCI Sourav Ganguly announced beforehand that the Asia Cup had to be cancelled even before the official statement came out. Whether he was told by PCB boss Ehsan Mani or the Sri Lankan cricket board, all this was all pre-planned," said Latif. The IPL 2020 will be played in UAE at the end of September.

(The above story first appeared on LatestLY on Jul 23, 2020 12:53 PM IST. For more news and updates on politics, world, sports, entertainment and lifestyle, log on to our website latestly.com).