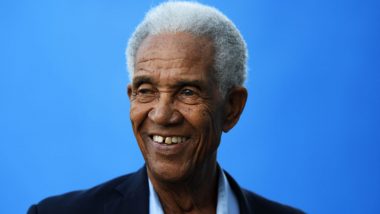 Search for the greatest all-rounder in cricket ends with Garfield Sobers also known as Sir Gary Sobers. The former West Indies cricketer was born on July 28, 1936, Chelsea Road, Bay Land, St Michael, Barbados. In 1975, Sobers was knighted for his services to cricket. Sir Gary Sobers was someone who excelled in batting, bowling and fielding as well. He batted left-handed and could bowl left-arm fast-medium, slow left-arm orthodox, and slow left-arm chinaman. Sir Garfield Sobers: From Six Fingers to Six Sixes, Here are Some Great Facts and Records of The Legendary All-Rounder.

Sir Gary Sobers made his Test debut against England at Kingston in 1954. He went on to play 93 Tests and scored 8032 runs at an impressive average of 57.78. The left-handed batsman scored 26 centuries and 30 half-centuries during his Test career. With the ball in hand, he picked 235 wickets with 6/73 as his best bowling figures. Sir Gary Sobers, however, played just one One-Day International (ODI) and that was against England in 1974. He was dismissed for a six-ball duck in that game, but managed to pick one wicket. As the legendary cricketer turns 84 today, we take a look at some of the records he holds.

Youngest Batsman to Score a Triple Century in Tests: Garry Sobers was just 21 years and 213 days old when he scored unbeaten 365 against Pakistan in 1958, thus making him the youngest to score a triple ton in Tests. He still holds the record followed by Sir Don Bradman’s (21 years, 318 days). Sobers’ 365 not out stood a record as the highest individual innings in Test cricket for 36 years.

First Batsman to Score 8000 Test Runs: Sobers fittingly was the first player to reach the milestone of 8,000 Test runs. He reached the landmark in 157 innings in 1974. Currently, he is the third-fastest batsman to score 8,000 Test runs after Kumar Sangakkara and Sachin Tendulkar.

Highest Maiden Test Century: Sobers early on in his career started as a bowler and would bat down the order. He was then promoted up the order, and while batting at number three, he scored 365 unbeaten against Pakistan. It was his maiden Test century, and he continues to hold the record for the highest maiden Test century. Only two other players have scored a triple century as their maiden test ton- Bob Simpson of Australia in 1964 and India’s Karun Nair in 2016.

First Batsman to Hit Six Sixes in an Over: The left-handed batsman became the first cricketer to smash six sixes in an over in first-class cricket when playing for Nottinghamshire against Glamorgan in 1968. Sobers slammed England’s medium-pace bowler Malcolm Nash for the record sixes.Sir Garry Sobers Birthday Special

(The above story first appeared on LatestLY on Jul 28, 2020 08:00 AM IST. For more news and updates on politics, world, sports, entertainment and lifestyle, log on to our website latestly.com).