Happy Birthday Sir Garfield Sobers! From Six Fingers to Six Sixes, Here are Some Great Facts and Records of The Legendary All-Rounder

Gary Sobers is certainly a popular name in the cricketing world and his on-field record is incredible too. So, on the occasion of his 82nd birthday let's have a look at some of the great facts and records of the legend's personal and professional life 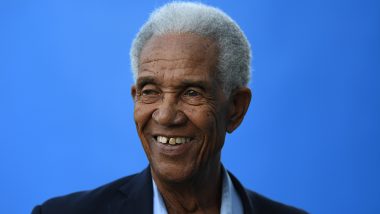 Former West Indies all-rounder Sir Garfield Sobers celebrates his 82nd birthday on Sunday. Born on July 28, 1936, the left-handed wizard is arguably the best all-rounder, the game has ever witnessed. Sobers was a dynamic left-handed batsman and a highly skilled left-arm fast bowler which made him a vital cog in the mighty Caribbean team which ruled world cricket in the '70s.

The former West Indies captain played a total 93 Tests in which he amassed 8032 runs at an astonishing average of touch over 57. Along with that, the all-rounder also claimed 235 wickets which makes him one of the most versatile cricketers to have graced the game. Well, Gary Sobers is certainly a popular name in the cricketing world and his on-field record is incredible too. So, on the occasion of his 82nd birthday let's have a look at some of the great facts and records of the legend's personal and professional life.

Debut and Last Match on the Same Day

The former West Indies captain made his debut on March 30, 1954, against England and twenty years later in 1974 he played his last game on the same day and against the same opposition too. Well, that's a bizarre fact!

Born with Six Fingers on Each Hand

Yes, you read it right. Gary Sobers was born with six fingers on each hand. However, his first extra finger fell off accidentally when he was just ten and he removed the second one intentionally at the age of 14 in order to play professional cricket.

First Man to Hit Six Sixes in an Over

The left-handed batsman achieved the landmark long before Yuvraj Singh and Herschelle Gibbs. On August 31, 1968, Sobers became the first batsman to hit six sixes in an over of professional cricket. Playing for Nottinghamshire, the southpaw showed no mercy towards Glamorgan's Malcolm Nash and smacked the bowler for six sixes in a single over. Hazratullah Zazai Pulls off a Yuvraj Singh, Hits Six Sixes in an Over for Kabul During Afghanistan Premier League 2018 Match (Watch Video).

In 1958, Sobers smashed the Pakistani bowlers to all parts of the ground and recorded the then highest individual score in test cricket. The left-hander scored 365 runs and overtook Len Huttons's 364. However, In 1994 his compatriot Brian Lara broke the record by scoring 375 against England.

The legendary cricketer has a prestigious trophy made after his name. The 'Sir Garfield Sobers Trophy' is annually awarded to the chosen best player of the year by the International Cricket Council (ICC). The trophy was first awarded to Rahul Dravid in 2004.

The veteran fell in love with Indian Actress Anju Mahendru in the 1966-67 tour. However, the relationship didn't work and they both parted ways. Sobers later married an Australian named Prue Kirby in 1969. The couple had two sons and an adopted daughter. Unfortunately, the marriage resulted in a divorce and they got separated in 1990.

So, these were some mind-boggling facts about the charismatic all-rounder. The Barbadian player was a stylish batsman who piled up big runs throughout his career, a canny bowler who foxed many batsmen and a gun fielder who hated the ball going past him. So, apart from wicket-keeping the 82-year-old has done everything an individual could do on a cricket field. With the way West Indies struggled in recent past, a certain Sir Garfield Sobers might well be a perfect recourse to bring the glory days back to the Caribbean Cricket.

(The above story first appeared on LatestLY on Jul 28, 2019 07:00 AM IST. For more news and updates on politics, world, sports, entertainment and lifestyle, log on to our website latestly.com).