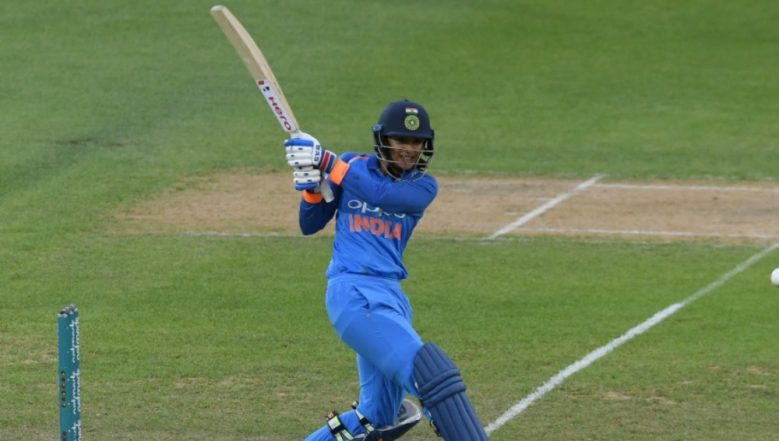 Smriti Mandhana’s dream run continues with the bat even in the T20I series against New Zealand. The Indian opener has already secured the number one ranking in the ODI and has been in a superb form. The Indian women’s team is playing their first T20I match against the Kiwis at Wellington today and Mandhana once again displayed grit scoring a blistering half-century. The 22-year-old scored 58 runs from 34 deliveries. Hitting seven fours and three sixes and thus became the fastest woman to score a half-century in 24 balls. Smriti Mandhana Becomes No 1 ODI Batswoman As per Latest ICC Rankings.

Even the International Cricket Council hailed Mandhana’s feat in a tweet. “SMRITI MANDHANA IS ON 🔥 The @BCCIWomen opener brings up her seventh T20I fifty off just 24 balls! It's the fastest T20I half-century by an Indian woman!,” read the tweet by the ICC.

SMRITI MANDHANA IS ON 🔥

The @BCCIWomen opener brings up her seventh T20I fifty off just 24 balls! It's the fastest T20I half-century by an Indian woman!

Talking about the first T20I, the Indian team won the toss and elected to field first. ODI women’s team captain Mithali Raj is left out of the squad. The Kiwis got bundled out on the score of 159 runs. It was Sophie Devine who scored 62 runs from 48 balls. Amy Satterthwaite, the skipper of the team scored 33 runs from 27 balls. India lost an early wicket in form of Priya Punia who was sent packing on the score of four runs from five balls. Mandhana and Jemimah Rodrigues held the fort for the visitors. Captain Harmanpreet Kaur who did not have a good time with the bat in the ODIs, also couldn’t do much and the Indian innings got wrapped up on 136 runs.