Born on July 8. 1972, Sourav Ganguly is known as one of the prolific captains of the Indian cricket team. Known for his aggressive and never-say-die spirit, Ganguly is said to have changed the face of cricket in India. Having scored more than 10,000 runs to his credit. While batting he was known as the God of Off Side. 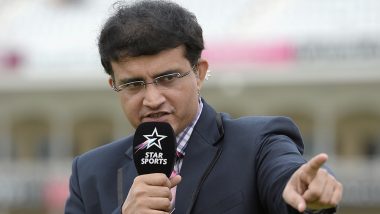 Born on July 8. 1972, Sourav Ganguly is known as one of the prolific captains of the Indian cricket team. Known for his aggressive and never-say-die spirit, Ganguly is said to have changed the face of cricket in India. Having scored more than 10,000 runs to his credit. While batting he was known as the God of Off Side. He retired from international cricket in 2008 and there have been many instances that Ganguly dominated the field with some swashbuckling innings. Even in the commentary box, there had been numerous instances where he had the last laugh. As the former Indian captain turns 49, let's have a look back at those instances. Sourav Ganguly Images & HD Wallpapers for Free Download: Happy 49th Birthday Dada Greetings, HD Photos in Team India Jersey and Positive Messages to Share Online.

This time it was Naseer Hussain who inquired about when will India win the FIFA World Cup. Little did the former English cricketer expect that Ganguly would end up rubbing salt on his wounds. Here's how the conversation turned out.

Hussain: When can I see India in the FIFA World Cup?

Ganguly: If India had played football for 50 years, then we would have qualified for the finals at least once.

Now, who does not remember this game when India won the Natwest trophy finals against England. This time it was Geoffrey Boycott who got shut down by the former Indian captain.

Boycott: You must mention his experience about playing against England and also that Natwest Trophy Final taking his jersey off and flying it in the air at the Mecca of Cricket! Oh, you naughty boy!

Ganguly (Imitating Boycott’s style and pronunciation): One of your boys also took off his jersey here in Mumbai.

Boycott: Yeah, but Lord’s is the Mecca of Cricket.

Ganguly: Lord’s is your Mecca, and Wankhede is ours.

Even Ganguly's colleague Rahul Dravid was even spared in the commentary box. Rahul Dravid took a jibe at Ganguly's fitness and his response was epic.

Dravid: If Ganguly had been a yard quicker and just a little bit fitter, he would have been a match-winner.

Ganguly: I wish I was the Prime Minister of India, I could have done a whole lot of things.

Ravi Shastri Asked if a Pavilion or a stand is Named after Ganguly:

Ravi Shastri and Sourav Ganguly have not shared the best of rapport. This time he needled Ganguly by asking him if there's a pavilion or a stand named after him at Eden Gardens. His reply was quite a mouth shutting one!

Ravi Shastri: In Eden Gardens, Kolkata, is there a Ganguly pavilion or Ganguly stand?

This time the Australian crowd was at the receiving end. So during one of the matches in Australia, The fan footfall clocked 7,653. Ganguly had a witty response to the attendance. The former Indian captain was heard saying, "The attendance today is 7,653. We have that attendance in Durga Puja."

That's all we have for now if you think we have missed out on your favourite instances, do leave your comments below. Coming back to Ganguly's birthday, we wish him a very Happy Birthday.

(The above story first appeared on LatestLY on Jul 08, 2021 07:30 AM IST. For more news and updates on politics, world, sports, entertainment and lifestyle, log on to our website latestly.com).