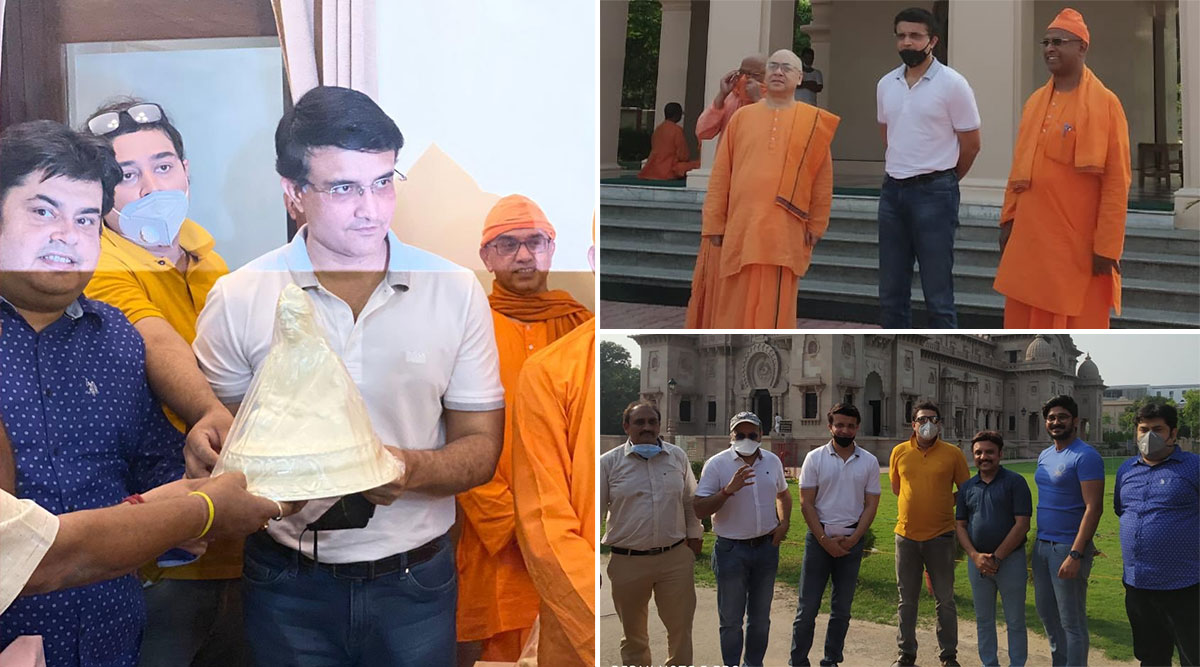 BCCI president and former Indian captain Sourav Ganguly, on Wednesday, visited the Belur Math in West Bengal and donated 2000kg of rice for the underprivileged in Kolkata. Ganguly, who had earlier pledged to contribute rice worth Rs 50 lakh for those affected due to the nationwide lockdown, visited the Belur Math in the Howrah district of Kolkata to honour his promise. The former India skipper even uploaded a few pictures of himself in the Ramakrishna Mission. The Bengal Cricket Association later put out a statement urging others to take Ganguly’s efforts as an initiative and start donating towards the needy. Mosaddek Hossain, Bangladesh Cricketer Provides Food to 200 Underprivileged People Amid Nationwide Coronavirus Lockdown.

“Visited Belur Math after 25 years .. handed over 2000kgs of rice for the needy,” the BCCI chief captioned a series of images in which he can be seen alongside a few monks of the Belur Math temple. The Cricket Association of Bengal (CAB) later thanked its former player and president for his humanitarian gesture and urged others to join in too. Rohit Sharma Praises Indian Oil for Uninterrupted Service Despite Lockdown, Urges People to Stay at Home Amid Coronavirus Outbreak.

Visited belur math after 25 years .. handed over 2000kgs of rice for the needy pic.twitter.com/FcIqHcWMh7

The @BCCI President @SGanguly99 at the #BelurMath today. He would be distributing 2000 Kgs Rice to the Institution.#CAB pic.twitter.com/wYhKx9iokQ

“It is heartening to note that Sourav Ganguly along with Lal Baba Rice has come forward to provide free rice worth Rs 50 lakh to the needy people who have been put in government schools for safety and security.” The statement from the state cricket association read. “Hope this initiative of Ganguly would encourage other citizens of the state to take up similar initiatives to serve the people of our state.”

The @BCCI President @SGanguly99 at the #BelurMath today. He would be distributing 2000 Kgs Rice to the Institution.#CAB pic.twitter.com/nXbffZVRRl

The 47-year-old had earlier joined hands with Lal Baba Rice to donate rice worth Rs 50 lakh to the needy and to those affected due to the 21-day nationwide lockdown. He had also offered the West Bengal state administration the indoor facilities and player’s dressing rooms of the Eden Gardens stadium for the state to turn it to a temporary quarantine facility or a medical centre amid the coronavirus outbreak.