A look back at sports headlines of the week gone by. 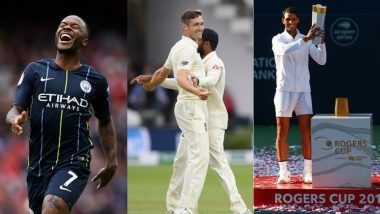 The 2018/19 season of the English Premier League got underway this week and fans who were left high and dry after an entertaining World Cup in Russia end in mid-July finally had reason to smile. Considered by many to be the most keenly followed leagues in the world of football, the brand of football on display in EPL is unique in a number of ways. In addition to EPL, the Indian tour of England provided plenty of entertainment as the world’s no 1 side faced the heat against a strong English team. Here we present the stories that grabbed the headlines in the week gone by from the world of sports.

Manchester United beat Leicester City 2-1 at Old Trafford in the EPL Opener: Jose Mourinho made Paul Pogba his captain in Manchester United’s opening day game against Leicester City on Friday as the 2018/19 season got underway. The Frenchman was quick to get his name in the spotlight as he dispatched a cool 3rd-minute penalty to give his side the lead. There were no goals in the game until Luke Shaw found himself free in the Leceister box in the 83rd minute to fire home his first senior goal for Manchester United. Jamie Vardy’s effort in the dying moments proved to be a consolation as the Red Devils started their campaign with all three points.

Manchester City beat Arsenal 2-0 in Unai Emery’s first game in charge: A new look Arsenal side looked off the place and turgid as Unai Emery marked his first official game as in charge of the Gunners with a defeat. Goals in each half by Raheem Sterling and Bernardo Silva meant Pep Guardiola’s men won their opening fixture without really breaking a sweat. There sleek passing and greater technical skills could not be matched by an Arsenal side that clearly lacked a game plan which could worry the Arsenal faithful considering they next play Chelsea.

England beat India by an innings an 159 runs at Lords: Shifting our focus quickly to cricket as England handed India a beating. The second Test between India ranked no 1 in Tests, and England was under the spell of huge rains for the majority of the four days it was in existence. But whatever amount of cricket that was played, England absolutely dominated every area of the field. Bundling out India for a paltry 107 in the first innings, the home side notched up 396-7 in a rain-curtailed second and third day of the Test. Chris Woakes scored a brilliant 137 while Jonny Bairstow contributed with 93. When India came out to bat in the second innings, they knew they had their backs against the walls. An equally terrible second innings with the bat saw them dismissed for 130 with James Anderson picking up five wickets to hand England a 2-0 lead in the series. 'Petition to Shift Remaining Test Matches to India' Twitterati Mock Virat Kohli and Co After Defeat Against England at Lord’s.

Sri Lanka beat South Africa in the 5th One Day, South Africa claim series 2-3: Akila Dananjaya produced a magical spell with the bowl as his six wickets restricted South Africa to 121 in reply to Sri Lanka’s 299. Earlier, skipper Angelo Mathews had hit a patient 97 off 97 balls to guide the home team to 299-8 in their allotted 50 overs. South Africa would be disappointed with their batting as they had no answers to Akila’s spin attack as they managed to play out just 25 overs. The good thing for South Africa was that they had already clinched the series coming into the final two games.

Saina Nehwal drops out of top 10 in badminton ranking: Indian badminton star Saina Nehwal slipped out of the top 10 in the World Badminton Ranking after her loss to Carolina Marin at the Nanjing World Badminton Championship. Off late things have not gone according to plan for London Olympics Bronze medallist and fans would be hoping she comes up with a strong performance in the 2019 Asian Games.

Javelin thrower Neeraj Chopra named India’s flag bearer in the 2018 Asian Games: Indian Olympics Association president Narinder Batra announced at the send-off ceremony of the Indian contingent that Javelin thrower Neeraj Chopra would be its flag bearer at the opening ceremony. The young athlete is one of the star names at the junior level and also the current Commonwealth Games champion. The 20-year-old is also one of the favourites for the gold medal in the Asiad and this news would be a huge confidence booster for him.

Rafael Nadal lifts Rogers Cup: 17-time Grand Slam champion Rafael Nadal handed Greek teenager Stefanos Tsitsipas a crushing 6-2, 7-6 defeat in straight sets to clinch his fourth Canadian Masters 1000 title at the Rogers Cup in Toronto. The world number one clinched his 80th ATP World Tour title and it was his fifth victory of the year. His contest with Tsitsipas lasted one hour and 41 minutes.

(The above story first appeared on LatestLY on Aug 13, 2018 10:06 AM IST. For more news and updates on politics, world, sports, entertainment and lifestyle, log on to our website latestly.com).