Suresh Raina took to Instagram and shared glimpses of the morning celebrations. “Birthday morning started with a delicious & healthy breakfast in the most beautiful setting,” wrote Raina while sharing some pics with his wife Priyanka and daughter Gracia. 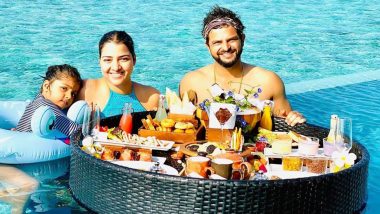 Former Indian dasher Suresh Raina celebrated his 34th birthday with his family at a resort in Maldives. The southpaw took to Instagram and shared glimpses of the morning celebrations.  “Birthday morning started with a delicious & healthy breakfast in the most beautiful setting,” wrote Raina while sharing some pics with his wife Priyanka and daughter Gracia. The trio can be seen feasting on a yummy meal while enjoying in the pool. The Raina family was all smiling in the pictures, and one can safely say that they are enjoying a gala time in the luxurious resort. Suresh Raina Birthday Special: Adorable Family Photos of Ex-India and CSK Cricketer With Family!

Raina – who’s regarded as one of India’s finest finishers – bid farewell to international cricket on Independence Day (15 August) 2020. The Chennai Super Kings (CSK) star didn’t even participate in the Indian Premier League (IPL) this season citing personal reasons. Amid all this, the left-handed batsman seemed to enjoy the coronavirus-induced lockdown with his family, and he continues to do so. Meanwhile, let’s look at how the 2011-World Cup winner started his birthday. Suresh Raina Birthday Special: 101 Against South Africa & Other Staggering Knocks.

Speaking of Raina’s cricketing prowess, the left-handed batsman was a sweet timer of the ball who could torment the best of the bowlers. Although he had some issues against the short deliveries, the dasher somehow managed to score runs in crucial situations.

Apart from his skills with the bat, Raina was a live wire on the field, and his ability to chip in with handy overs made him a captain’s delight. However, dip in form kept him out of the national team since 2018, and subsequently, he announced his retirement earlier this year. Nevertheless, Raina is expected to continue featuring in IPL.

(The above story first appeared on LatestLY on Nov 27, 2020 02:24 PM IST. For more news and updates on politics, world, sports, entertainment and lifestyle, log on to our website latestly.com).