Suryakumar Yadav Injury Update: MI Batter To Be Out of Action for Four Weeks

Already being ruled out of the remainder of the IPL 2022, Mumbai Indians and India batter Suryakumar Yadav is likely to be out of action for at least four weeks. 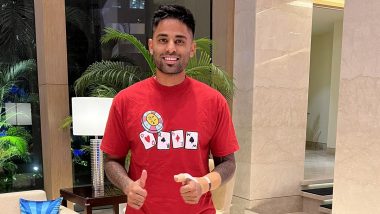 Mumbai, May 10: Already being ruled out of the remainder of the IPL 2022, Mumbai Indians and India batter Suryakumar Yadav is likely to be out of action for at least four weeks. Suryakumar, who has suffered a left forearm muscle injury, could miss a few games of next month's South Africa series. India will play five T20Is against the Proteas at home from June 9 to 19 after the end of IPL on May 29. The batter got hit on his left arm while taking a run during MI's match against Gujarat Titans on May 6. Next morning he woke up with a swollen arm, which eventually ruled him out from the rest of the ongoing IPL season. Suryakumar Yadav Thanks Fans for Support and Blessings After Injury, Assures 'Will be Back In No time'.

According to sources in the BCCI, Suryakumar, who amassed 309 runs for Mumbai from 8 games which included three half-tons, will be out of action for at least four weeks, a Cricbuzz report said. However, the four weeks' rest do not necessarily mean that the cricketer will be completely out of the South Africa series. "Suryakumar Yadav has sustained a muscle strain on the left forearm, and has been ruled out for the season. He has been advised to rest, in consultation with the BCCI medical team," Mumbai Indians said in a statement on Monday. Suryakumar Yadav, Mumbai Indians Star, Ruled Out of Remainder of IPL 2022 With Muscle Injury.

It has been learnt that the stylish batter has not proceeded to the National Cricket Academy (NCA) in Bengaluru after the detection of his injury and will undergo scans on Wednesday in Mumbai. The South Africa series is being seen as crucial to India's preparation for the T20 World Cup in October-November in Australia and Suryakumar may be conditionally picked, subject to attaining full fitness. However, a lot will depend on when the selection committee meeting takes place. As of now, there is no information on the date of the meeting.

(The above story first appeared on LatestLY on May 11, 2022 10:25 AM IST. For more news and updates on politics, world, sports, entertainment and lifestyle, log on to our website latestly.com).